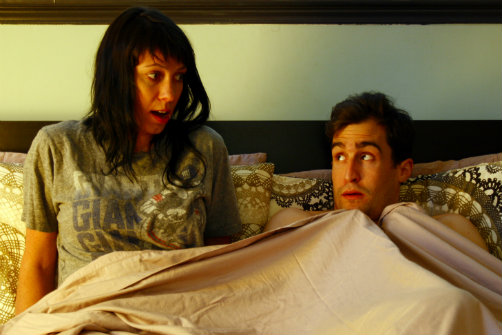 Hallie Schwartz and Patrick Truhler in Birds of Paradise. Photo by Lizzie Harrell.

BOTTOM LINE: An honest and heart-felt story about two (love) birds struggling between giving love a chance and becoming the perfect version of themselves.

In theatre we say that telling a story is retelling it, and that there are only a handful of subjects to be explored. Originality is not in the what, but in the how. And that’s the first merit of Birds of Paradise. Written and directed by Adam Harrell, we’re given one more story about love, albeit romantic love, love between a man and a woman, love that is monogamous. But here we breathe the fresh air when said love is told through the perspective of Archie (Patrick Truhler), an ornithologist who’s fallen for Emma (Hallie Schwartz), an artist in the making.

The story begins on the morning after their last night together. She’s been accepted into a graduate school art program in Japan and he’s been hired as a substitute teacher. Both wake up in a hurry, both are on the cusp of becoming the perfect version of themselves, but both are also going their separate ways. From here on until the end, the story is told on two fronts. Archie’s classes are intercalated with flashbacks that move backwards from their last to their first encounter, explaining to us how it all began. Although not a new feature in theatre—for instance, Pinter explored the backward storytelling in Betrayal—backtracking towards their first encounter, juxtaposed with Archie’s lectures on the customs and migratory patterns of birds, helps the play become a fun puzzle of clues and hints about their probable future as a couple.

Despite the fact that both actors begin the play in a somewhat high-strung state of being and initially seem to be ahead of the play’s tempo, this doesn't last for long, and Truhler gives us a charming portrayal of a dorky, hopeless romantic whose love and respect for birds make him a keen observer of people’s habits. His comedic timing and facial expressions add to the delight that is Archie. Schwartz, while quite good as the free-spirited, slightly out of control and broken-hearted artist who needs to find her voice, seems to take longer to find her character during the performance. Midway through, she slowly finds her center and eventually shines as she delivers the quick but moving closing monologue of the play.

Aided by the intelligent lighting design of Susannah Baron and the equally precise sound design of Rich Johnson, Adam Harrell manages to turn one small underground venue into five different spaces, allowing the landscape of his to unfurl before our eyes, thereby painting the landscape for the migratory tale of heartbreak, love, and hope. As the designer of Emma's art, Jackie Connolly gives us work that is timid but on point when exemplifying the abstractness of Emma’s personality and her potential and untapped sensibility for affection—both through Emma's abstract paintings and her natural study of a pelican, a bird with which Archie shares many traits.

Birds of Paradise develops the ins and outs of a one-night stand that turns into something more than expected, and ultimately aspires to love. While the comedic tone works for most of the play, the sarcasm in the confrontational scenes between Archie and Emma seems off occasionally; still, the script is rather tight and effective. Maybe a further development of Emma’s arc might help with balancing, since Archie’s emotional journey is greater in detail and more nuanced than hers. Having said that, Birds of Paradise constitutes a fine comedy, suitable for the entire family with the ability to bring a few tears even to those who don’t consider themselves romantics, like yours truly.