Written and performed by Alex Mahgoub; Directed by Armando Merlo 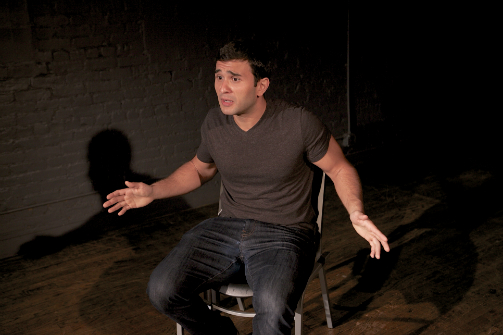 BOTTOM LINE: Who knew finding oneself amidst tragedy could be so comical?

Growing up under the watchful eye of a strict, strong, and alluring dad is no easy task. And for Alex Mahgoub, growing up with an Egyptian father who has made his life and riches from scratch came with many strings. Baba tells the real life story of Alex, the son of an Egyptian migrant who rises from poverty through hard work and perseverance, a man whose personality and strength were the steel hammers that shaped Alex for life. Amidst tragedy, Alex must learn to grow up and cope with insecurities about his strength, sexuality, image, and purpose in life. Through vignettes that take us from childhood to present day, Alex finds humor and insight while growing up in a confusing and challenging environment.

Baba is a conventional solo show that tells a story we have heard many times. However it is Mahgoub that makes this show. Mahgoub is an actor with enough charm to fill the room. Even though his characters can come across as shtick and one-dimensional and his accents tend to fluctuate, he manages to charm us all with his humor, honesty, and incredibly sincere storytelling. He has the ability to be incredibly vulnerable and open about his insecurities. When talking to us about his body image growing up, we are all taken back to the days we spent scrutinizing if we might one day grow up to be handsome, intelligent, and capable.

By choosing to be vulnerable and honest, Mahgoub makes the strong decision to go against the flow. Having grown up in a household where macho idealism and aggression were the way things got done, he decides to swim against the current and in turn becomes an charming, confident, and successful man. This story has as many unexpected twists as any daytime soap out there, however, Mahgoub never allows the storytelling to become overdramatic. There are some touching moments where he chooses to find humor and light in some very dark times. He tackles the realities and tragedies of his life with an honest sincerity that allows you to be completely transported into his world.

Even though we have heard the story of the underdog overcoming all obstacles to find happiness and success, they still entertain. Baba does not disappoint.