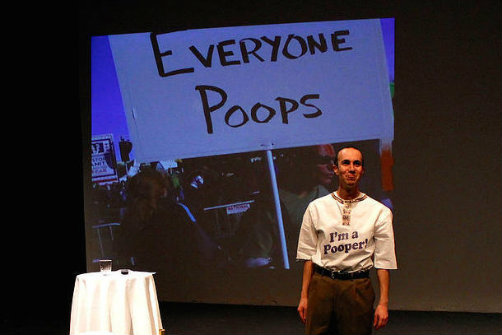 Shawn Shafner in An Inconvenient Poop. Photo by Ellise Lessner.

Turns out that there are a slew of problems associated with the unpleasant topic, ranging from climate change and ecological issues to morality and our self worth. In this solo performance, the charismatic Shawn Shafner plays two characters—the uptight Dr. Oscar von Shtein, a professor who believes he is there to present a FREDx Talk on fireplaces and Proust, and the interloper Puru who hijacks the talk (and Dr. von Shtein’s body as well) to discuss, you guessed it, poop. Through the use of a surprisingly expansive number of amusing textual citations (projected to great effect by designer Charles Caster-Dudzick), The Puru provides an engaging exploration of our fears and morality in relation to the history of toilets and defecation and their importance to society.

Communicating information like this could be pedantic and tedious, despite the inherent titillation of the subject matter, but Shafner and director Annie G. Levy find ways to keep the audience fully engaged and invested through not only the aforementioned projections, but both rewritten and original songs (beautifully sung by Shafner and co-composed and orchestrated by Joshua Sitron), as well as the simple, but effective, lighting (designed by Kyle Kravette) and sound (designed by John Emmett O’Brien).

So many elements in this production work, but I do question the framing element of the Dr. von Shtein character. While his goofiness provides comedic moments, not to mention a dramatic arc for the piece (the initially resistant professor is eventually won over by The Puru’s arguments), Shafner is so charming as The Puru that Dr. von Shtein feels more like a device than a fully realized character. The core material is so strong that I wish Shafner and Levy trusted the audience would stay with them without the contrivance.

Despite this, An Inconvenient Poop is not only fun and entertaining, but important and provocative. The arguments have stayed with me and make me want to do my part to spread the play's message one flush at a time—or without a flush, as, we learn, may actually be the healthier and more environmentally sound method.