America's Next Top: One Top’s Hysterical Take on Life, Love, Tools, and Boxes 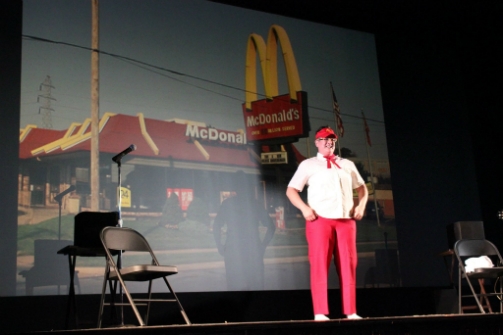 Julie Novak in America's Next Top. Photo by Michael Gaylin.

Novak smartly plays with expectations from the start, launching the show wearing a wig and dress while singing a reworded Cher tune only to quickly reveal her own spiked hair and far more androgynous clothing preferences. She is playfully self effacing throughout, and many of the biggest laughs come from the strong physical comedy skills Novak displays.

The show is at its best once Novak settles in. Early on she rushes, costing her a few bits that are funnier than they land. By the time she arrives in the story of her first job as a McDonald’s drive-thru cashier, however, she commands the room.

This section gets to the heart of what makes America’s Next Top work. Novak shares the discovery of her own surprisingly feminine teenage figure in her McDonald’s work uniform. It stands in stark contrast to the way she imagined herself from an early age (carrying a stolen Craftsman toolbox up the driveway at three years old).

This moment opens the door to a series of stories about her attempts to try on rigid versions of gender and sexuality. There is a boyfriend. He quickly disappears after she receives a “lesbian starter kit” which includes everything from denim overalls to Ani Difranco albums—pre-1998. In one particularly hilarious section she imagines an open mic night at a queer friendly coffee shop.

Director and co-writer Eva Tenuto (and, as the play reveals, wife to Novak) handles the limitations of festival producing well, managing a variety of lighting looks and well timed simple projections that help shift the evening from pure stand-up to a more polished piece of theater.

Most admirable is that Novak keeps the evening uniquely personal, avoiding the pitfalls that might come with an attempt to turn explicitly towards general themes around gender. In sticking with her own journey and sharing her obvious comfort with and sense of humor about herself, Novak manages to do something far more valuable: remind us that you don’t have name who and what you are just to make some stranger across the room feel at ease.