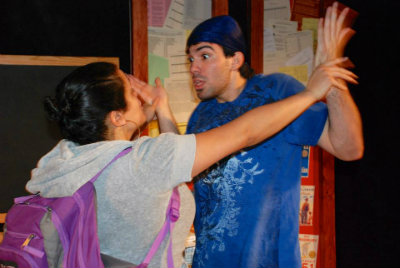 Desiree Rodriguez and Gonzalo Trigueros in WHY YOU BEASTING?. Photo by Steve Durham.

BOTTOM LINE: A darkly funny play about teachers, students, and the system that controls them.

According to the author’s note in the program, David Don Miller discovered the idea for his play about students and teachers in a Bronx public school from living it. Very early in the play it is evident this is true. The students speak and act with such realistic accuracy it seems like their dialogue was written down word for word from conversations Miller heard while teaching. The ensemble of actors portraying the students captures the language and physicality of inner city high-schoolers well. The teaching staff is played with cleverness and personality -- ranging from the burnt-out science teacher to the socially conscience social studies teacher. The performances are strong throughout and director Markus Potter populates the school intelligently. Watching the piece there is a feeling that we are not only watching one class of students in a Bronx school, but also a class of students that represents all inner city public schools. It is well-crafted synecdoche showing us problems in the system through the issues faced in this one specific school.

The first act of Why You Beasting? is so well written despite its limited plot development it felt as though no plot were needed. The play could have very easily stood on its own as a truthful depiction of the school system and those who are directly affected by it. However, in the second act a plot appears and unfortunately it takes us away from the verisimilitude captured in the first act. The play becomes a series of farcical scenes in which the protagonist repeatedly tries to get into enough trouble to be thrown in “the rubber room,” a detention center for teachers accused of wrongdoing. In these scenes, the believability of the piece is dimmed and much of the power gained from the first act’s brutal honesty is lost.

Despite the unfortunate turn in the second act, this play is still a strong piece of theatre. We’ve all been to school, and everyone’s experience is different, so watching a play that so accurately depicts one perspective of that experience is immensely enjoyable. Miller brings up several issues that students, teachers, and the public at large deal with daily in relation to the public school system. He doesn’t give answers, only presents the questions, and in that Why You Beasting? finds strength. Overall, the show brings plenty of laughs and thought-provoking moments to make it a great time at the theatre.