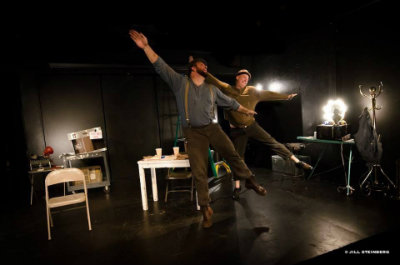 Sunday afternoon, the Kraine Theater was sold out for the final performance of Waiting for Waiting for Godot, and for good reason too. Dave Hanson, Chris Sullivan, and Amy Weaver gave a flawless performance that I have been describing to my friends as an amazing, hilarious, clever, damn near perfect, enthralling, piece of genius work. I wonder if my raving has already gone too far, but I am confident the accolades are well deserved.

The first aspect to take note of is the script's parallels to Samuel Beckett's Waiting for Godot. Rhythms of energy, themes of conversation, and ideas of physical humor are all taken into account by playwright Dave Hanson (who also takes part in the show). Even the famous line “Nothing to be done” is incorporated in a serious and comical manner. What I find wonderful, is even if an audience member is not familiar with Beckett's work, they are still included in the uproarious laughter and side-splitting and wonderful ridiculousness.

Val and Ester are two actors waiting backstage as understudies, while they pass the time talking, fighting, learning, and singing with recurring subjects of time, suffering for your art, and following rules. Where in Beckett's work the actors are waiting for Godot, in this production that unknown entity is switched out for the ever elusive and intimidating director. Quips are made that mock actors and the experience of being in the theatre/theatre classes/show business. Though the mockery is unrelenting, it is in good fun. What a warmhearted way to be able to laugh at ourselves. Again, even those who have not had the experiences of the Meisner technique, finding an agent, or being backstage during a show are never denied opportunities for smiles and chuckling.

The characters demonstrate a mix of excellently executed physical humor and cerebral pondering. Interactions with the character of the assistant stage manager (ASM) add another dimension of discussing and defending the art of acting. Phrasing such as the actors describing themselves as “conduits of creative inspiration” dust the show with quotable moments while the ASM insists that acting is not that hard. She even gives a snippet of the process a production crew must deal with throughout a live show. Val and Ester plot so they can finally perform, but they also fear being cut from the show and doubt that their skills will be enough to form and extend a career. They deal with thoughts of regrets, but even turn those valid thoughts into farce.

As an actress myself I often feel like my suspension of disbelief malfunctions so I am unable to immerse myself in performances I watch. This show takes ideas from an already famous and brilliant work, combines it with actors who are at the top of their game, and throws in wisecracking dialogue, which allowed me the rare opportunity to become wrapped up in the production. It was painful to turn my head away to jot a quick note here and there since I did not want to miss a moment of the magic the crew and performers created.