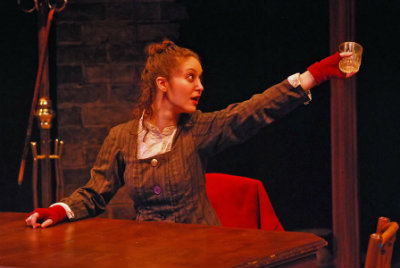 BOTTOM LINE: This gripping portrayal of Mary Jane Kelly, Jack the Ripper’s final victim, is as relevant today as ever.

The Unfortunates presents the audience with Mary Jane Kelly (Diana Cherkas) attempting to sell a memento from a previous victim of Jack the Ripper to a nameless stranger in an abandoned bar. While the conceit may be a bit of a stretch, it nevertheless gives way to an entrancing evening of theatre. The Unfortunates ostensibly tells the tale of Mary Jane Kelly’s life and relationships while the Ripper is an ever-looming shadow, but it is more a capsule of turn-of-the-century England and its societal struggles. It is also almost impossible not to draw parallels to sensationalist stories of the 21st century, from Columbine straight through to George Zimmerman, and how the public will tend to footnote a victim by their death rather than their life.

Cherkas’s portrayal of Mary is stellar. From her tales of her husband dying and her first taking up prostitution, straight through to her depiction of her friend Catherine (‘Cath’) Eddowes’s inquest, she instantaneously earns the audience’s affection and empathy. Throughout the piece she also portrays many other characters: Cath, Elizabeth Stride (the character I found the most entertaining), and an assortment of other friends, police officers, ex-lovers, and ex-clients.

While Cherkas expertly goes in and out of these other personas, I did find myself wondering if Mary herself would be depicting such a wide variety in her discussions with a stranger in a bar – but suspension of disbelief won out in the end and I went along for the ride (particularly as the bits that caused me to raise my eyebrows were all eventually explained by the text). But where the piece really shines is in the more heartfelt moments of Mary’s mourning for Cath.

The Unfortunates is a far more polished production than I am used to seeing at the Fringe festival and could easily be further developed for a commercial run. It is worthy fare whether you are overly-familiar with the Ripper mythos (as I am), or just looking for an evening of thought-provoking theatre. While there are some elements that could be improved, such as preparing the audience for the multiple character portrayals from Mary’s perspective, all in all I found The Unfortunates to treat all of its history with respect. I can definitely see why Backstage chose this as one of the ten shows to see in this year’s festival.