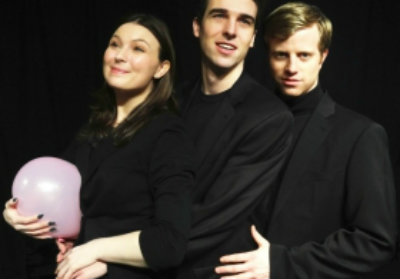 BOTTOM LINE: This clever and hilarious play dissects the marriage of Tom Cruise and Katie Holmes to offer deeper insight into the nature of celebrity and the media.

The courtship, marriage, and divorce of Katie Holmes (Julie Dahlinger) and Tom Cruise (Walt Delaney) -- known as TomKat by the media -- was gold for the tabloids who played up the mysteries surrounding their relationship, the bizarre factor of Scientology, Tom’s increasingly erratic behavior, and Katie’s escape from what was shown to be a controlling and suffocating relationship. While much of the story occurs several years in the past, it was only a little over a year ago that Katie Holmes divorced Tom Cruise and was photographed starting a new life for herself in New York. Writer Brandon Ogborn narrates the show which retells their ill-fated relationship. Ogborn admits that much of the play is pieced together from hearsay, gossip, and entries on Wikipedia, although many of the script’s funniest moments consist of real reenacted interviews with Holmes and Cruise, as well as those closest to them. During these scenes an actor holds a sign emblazoned with the words “this dialogue is verbatim,” waving the sign when the dialogue becomes particularly wacky, as if to say, "no seriously, we did not make this up."

As the play reenacts Cruise’s disastrous press junkets, magazine and TV interviews from both Holmes and Cruise, and commentary from Holmes’ family, we gain a glimpse of celebrity myth-making and how the media can both create and then destroy a celebrity. Reenacted conversations with studio heads show how actors are viewed not as individuals with their own needs and feelings but rather products to be sold to audiences.

Of course, on the play’s very surface is an opportunity to lampoon two celebrities who held our collective interests for years and use their own words to make them seem like foolish idiots who happened upon their success by chance. Walt Delaney is immensely convincing as Tom Cruise, resembling him somewhat physically and nailing down a perfect impression of his voice. Julie Dahlinger meanwhile masters some of Katie Holmes signature mannerisms: the hair tucking and talking softly out of the side of her mouth. The other four actors in the cast tackle the other roles all proving themselves to be chameleons as they jump from one role to another. Brianna Baker, for example, manages to be convincing as both Oprah and as Cruise’s attorney Bert Fields.

In one of the more insightful moments of the play a particularly snarky Vanity Fair writer (played by Alison Yolo) proclaims that Tom Cruise is not a real person but a machine incapable of feeling love while the actor is shown angrily shouting “I am a real person!” An actual phone conversation between he and Nicole Kidman that was illegally intercepted and published is then reenacted, in which Cruise shows how self absorbed and narcissistic he is, yet also capable of love. The fact that this conversation was recorded and published shows the public’s hunger to know the true people beneath the façade actors create and the stories created by tabloids.

The play also attempts to tell the story from other angles, wondering what if, perhaps, Katie Holmes was not the innocent victim all along and planned the marriage and divorce as a means of reviving her career? Tom is then shown to be a naïve but well meaning man who is manipulated by The Church of Scientology. The TomKat Project shows the mythology surrounding celebrities and the way narratives are fabricated, and at the very least it is a chance to relive some of the greatest, most absurd moments of celebrity gossip. If you are lucky enough to gain tickets for its last performance in The Fringe you are sure to spend the evening doubled over in laughter, for those who are not we can hope that this show lives on past its duration in the Fringe Festival.