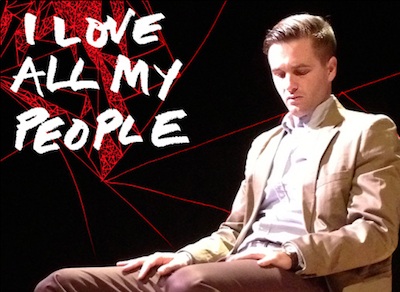 BOTTOM LINE: A well-crafted play that examines life, suffering, and the machinations behind it all.

Oren Stevens' The Assessment is an intriguing new solo show, written as a direct-address monologue presented by an ambiguous "Speaker." Performer Alex Grubbs imbues the Speaker with a sincere authenticity. He tells the audience about his job and, like it or not, the drama involved in his industry. He repeats how much he loves the individuals he is forced to encounter in his profession, and how much he loves "all his people," even those sitting in the audience. Authoritative but not imposing, the Speaker is in full command of our attention.

The play is built with a through-line of intrigue, and early on we're told that there will be questions we will try to answer. With this in mind, Stevens exposes the details of who the Speaker is carefully, never revealing too much or letting our thoughts get away from the presentation. Grubbs and director Nora Ives do admirable work delicately dangling the carrot just enough to keep us engaged.

The Speaker tells us about his responsibility in the every-day tragedy that happens to our neighbors and friends. To illustrate his point, he tells us about Frank, a normal guy who falls victim to some pretty terrible things, including a house fire that kills his kids and a pancreatic cancer diagnosis. We learn that the Speaker is responsible for these circumstances, and that's just the way life works. It can be extra hard to hear gruesome facts presented so matter-of-factly, and Grubb's serious but conversational demeanor keeps the tone delightfully creepy.

The Assessment lets you piece together the specifics of who the Speaker is and what exactly he's after. If it's a bit forced, it's all forgivable as we know from the beginning that we will be deducing something. Perhaps what's most important is just how thoughtful the attention is to the "experience" -- this piece is crafted for an audience, and it's certainly enjoyable to take part.