The A is for Abortion Play

By Cassandra Hume; Directed by Joanna Bowzer
Produced by In Search of a Love Song Production 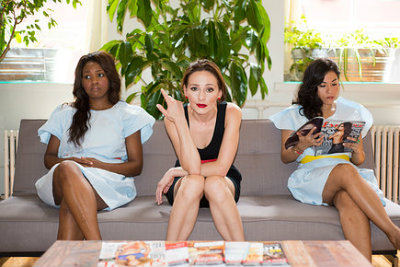 BOTTOM LINE: The issue of abortion is explored through real life personal stories in this powerful and humorous production.

Creating a play centered on the topic of abortion is surely an ambitious and an arduous task. Besides tackling a dark topic most people would rather not have to think about, one creating such a play also has to consider the strong political views on both sides of the issue. Although playwright Cassandra Hume is certainly pro-choice, her play does not so much serve to argue for the need for abortion or defend the right to obtain one, as it does to normalize the act of having an abortion (and just visiting the gynecologist, something the women in the play do in several different scenes.) When creating the play Hume interviewed multiple women, writing a script that was inspired by real women and real stories.

At the center of the play is Alexa (Candace Bryant) a woman who is about to have her first abortion. As she is nearly 30, she feels guilty that she is no longer an irresponsible “kid” and is at a reasonable age to become a mother. She discusses her decision with her friends and later finds, “Everyone has a story. We didn’t say anything and I don’t know why.” The reason behind Alexa’s choice is never clear, just that it was something she felt she had to do. Dani (Eilis Cahill) has a more conflicted story. After becoming pregnant by a man who doesn’t care about her or want anything to do with her, she finds herself in need of an abortion. But beforehand she is forced to have an ultrasound, presumably to dissuade her from doing so. While waiting to in the abortion clinic she has flashbacks to her younger years as a Christian who would protest outside of abortion clinics, trying to discourage women just like her from having abortions. Bethany (Jen Harris) has an abortion but later experiences the joy of motherhood when she becomes pregnant again later on. Clarissa (Julissa Roman) becomes pregnant after the condom breaks and her foolish boyfriend does not bother to tell her. When Clarissa complains he tells her that he had assumed she was on the pill and shrugs off his role in the accident. Clarissa’s story seems to be the only one that argues for the necessity of abortion as a last resort.

The A-Is-For-Abortion Play shows speeches from both the pro-choice and the pro-life camps (both delivered by Ellen David, who takes on multiple roles.) Despite this heavy topic, there is also plenty of humor in this piece, mostly coming from wacky dream scenarios. In one of the most amusing Clarissa imagines what she would have done if she had decided to keep the baby and imagines herself as a very pregnant cocktail waitress in a club full of annoying people.

While Hume’s mission was certainly not to politicize the issue, giving a little more light to the specific rules and difficulties regarding procuring an abortion as well as the circumstances that drive a woman to do so might have made this work stronger. While the dream sequences are certainly cute and funny some of them detract from the overall message of the play (including a prolonged dream scenario at an “Abortion Ball.”) Nonetheless, Hume creates an interesting look at a complex issue. The strong, emotionally charged performances from these actors help to make this a powerful, attention grabbing production that explores this issue in a new and unexpected way.