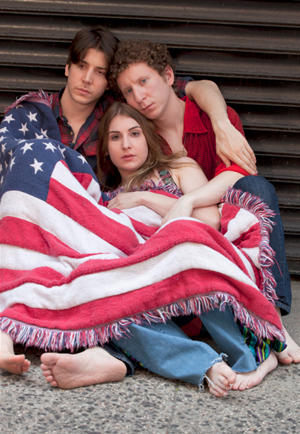 BOTTOM LINE: A drama about loss in the Vietnam era, as experienced by three college students.

Grief brings three college students together in Suicide Math, a drama that takes place at Princeton during the Vietnam era. Frank (David Gelles) and Michael (Jonathan Randell Silver) are roommates, dealing with a best friend's suicide and a brother's deployment overseas, respectively. A stranger wearing nothing but an American flag blanket stumbles drunkenly into their dorm room one night and reveals her own struggles dealing with her sister's death. Throughout the play the three get close and we get an insider's look at life during a precarious time in American history.

The stranger is Lydia (Sarah Shankman), a Vassar student with a penchant for sex and booze. Rehab and an expensive shrink don't seem to have done much as she pounds the Glenlivet, trying to remember just where she left her clothes. But as fate would have it, she takes a liking to Michael, and he to her. In the subsequent days they shack up and learn to cope with the nagging grief that holds them back.

At the same time, Frank sifts through his deceased friend's belongings, including thousands of pieces of paper containing some sort of computer code. Franks knows it has meaning, as it was left by the friend as if to intentionally be found in the wake of his death. Franks sets off to solve the mystery (and this is when it starts to feels a bit like David Auburn's Proof).

Performed with impressive candor by Gelles, Silver, and Shankman, Suicide Math offers a sincere tale about how we cope. The three actors do fine work getting to the gritty truth of their characters. Shankman, in particular, imbues Lydia with a quirky sincerity that demands our empathy despite her poor decision-making.

Jim Shankman's script seems intentionally cerebral in both plot and dialogue, but as the characters are Ivy League mathematicians this works well. It's when the dialogue gets especially poetic and verbose that it seems to veer into maudlin territory, getting away from the stark realism that makes the play work best. Certain overly emotional moments milk the drama -- including Frank's erratic behavior that feels more "mental breakdown" than "lack of sleep" -- but the added energy offers a sense of urgency, and director Jake Turner takes care with the pacing so we're always in tune with the action. There are few surprises in the story and never any real risk for anyone involved, but as a character study of young people in perilous times, Suicide Math is an engaging assessment.