See Jane Give Up Dick 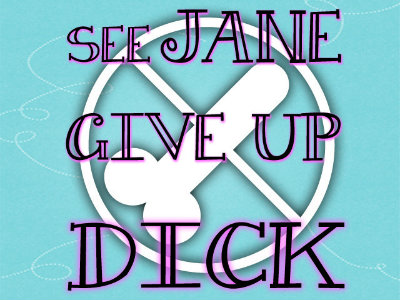 BOTTOM LINE: This play is full of laugh inducing one liners centered on one woman's struggle to be celibate for a year.

The one woman show See Jane Give Up Dick opens up with Jane (Meghan Mae O’Neil) posing the question: Do you feel that our society’s effort to be more sexually liberated has “caused the swing to swing too far in the other direction?” Despite lamenting that we have become too sexualized, most of the humor in the play stems from just how impossible it is to be completely celibate for an entire year. Jane makes herself this promise after a particularly dour New Year’s Eve during which she realizes how dependent on sex and sexual attention she has become.

While this play seems to be much like the (mostly) autobiographical solo shows in FringeNYC in which performers write and perform their own real life stories, See Jane Give Up Dick is actually a work of fiction (although it seems just realistic enough to make me believe it might be slightly inspired by real life events). While Meghan Mae O’Neil seems to embody the character completely, she is merely just playing a role, something that makes the story not quite as intriguing as those that claim to be from real life.

Celibacy is hard for Jane, and just to make sure no men ever will have sex with her she decorates her apartment with unicorn posters, gains weight, and dons a floral muumuu. Jane replaces sex with food and in a funny PowerPoint presentation shows that “yes, cheese really is as good as sex.” In giving up sex, however, Jane realizes she has no other interests than men. Realizing how poorly she knows herself she decides to go on a date with herself. (What follows is a cutely mimed montage in which Jane attempts to play both sides in a typical date.) Jane eventually realizes that her obsession with men stems from the fact that her father wasn’t there for her and neither was any other man. Jane realizes that what she is looking for is “real intimacy.”

While the wacky sex jokes that fill See Jane Give Up Dick are laugh-out-loud funny and had the audience in stitches, giving a bit more time to the problems that made Jane so sex obsessed might have strengthened the play (although as it is it's certainly entertaining). O’Neil is incredibly talented at comedy and manages to milk every laugh possible from each punch line and turn a dance routine into a reason to erupt into giggles. She even managed to successfully improv when an audience member’s phone went off in the middle of the performance. See Jane Give Up Dick is an immensely funny show that shows off O’Neil’s comedic gifts.