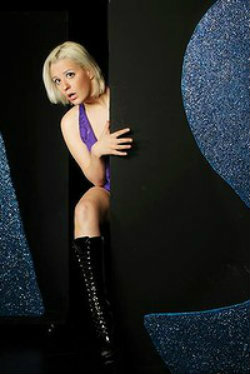 The trials and tribulations of a stripper are comedic fodder in this one act play from Melbourne, Australia. Performer Hannah Williams plays a stripper who goes by the stage name Mercedes Benz and clumsily tries to master the tricks of the trade while complaining about the demands of the job. Although Williams gives no information regarding whether or not she has any firsthand knowledge of the profession, her more thoughtful critiques of the industry seem to be spot on enough to suggest she either has firsthand experience or knows someone who does.

Williams script is most interesting when she delves into the tricks she uses to be sexually arousing to men, for example saying that she has to talk in a very high baby voice while saying sexy things, then proceeding to talk about her “boobies” in a shrill voice. Williams parodies the sexy moves of strippers by exaggerating typical stripper dance moves and doing such things as clumsily falling over during a pivotal moment in her routine. In one scene Williams tries to spray herself with whipped cream to be sexy but winds up covering herself and her stripper pole in a mess of cream, later asking audience members to clean her off. As the play goes on Williams depends on audience interaction for humor, climbing on the laps of audience members, giving lap dances, and involving them in her play. While this led to many funny moments during the course of the performance, it also led to a lot of discomfort and audience members purposefully sitting in the furthest corners. As Mercedes is shown to grow tired with her job she soon complains about the tired routine of acting sexy and shows herself performing while suffering from a terrible cold and exhaustion.

Williams is a gifted comedian and is especially adept at physical comedy. Her play could be stronger however if her character was more developed, giving us insight into what draws one to this work or what runs through an intelligent woman’s mind when she tries to arouse her most philistine customers. Although Meredes Benz Awkwardly finished its run at the 2013 Fringe Festival, you can still check out Williams’ comedic skill on her web series Dash and D’Bree at dashanddbree.com or find out more about her show at mercedesbenzawkwardly.tumblr.com.