Written and Directed by Ulrika Ellemark 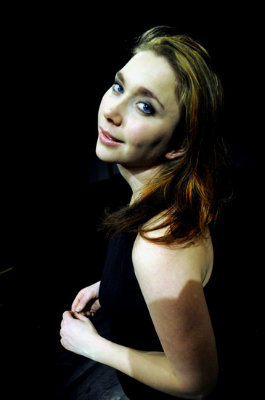 Ulrika Ellemark in FXXX ME!

BOTTOM LINE: In this dark satirical comedy Ulrika Ellemark makes an argument for gender equality by performing as the embodiment of female subservience and objectification.

If there’s one show in The Fringe guaranteed to make Eve Ensler squeamish it would be Fxxx Me, a show that seems, at least on the surface, to be the absolute antithesis of The Vagina Monologues, as a woman delights in female subservience and expresses disgust over equal rights and feminism. While The Vagina Monologues depicted women learning to love and accept their vaginas, performer and writer Ulrika Ellemark openly shows a dislike and disgust at her own vagina and vaginas as a whole. “When I look at a vagina I think that I want to put it on a diet,” she says, lamenting on what she perceives as its ugliness and fatness, later praising the beauty and superiority of penises.

Given the content of Fxxx Me and Ellemark’s many lamentations that “the worst thing is a feminist,” one might be surprised that Ellemark is from Sweden, a country known for having great gender equality. Although the content of Fxxx Me first surprised and offended me, I quickly jumped to the conclusion that Ellemark’s show must be satirical. Although the brief program notes for the show do not make its intention or tone clear, Ellemark hints at the fact that her show is a satire by including this statement as explanation: “When I decided to do a one woman show about being a young woman living in Sweden, known as one of the most gender equal countries in the world, I realized that I had to make a choice. If I were to go on stage performing thoughts and views that everybody agrees with, there would be no drama. I needed to take my opinions and turn them upside down.”

As the show goes on, Ellemark criticizes women and emphasizes their need to be subservient. Ellemark offers such advice to women as to not talk too much around men and not complain about washing dishes, because it is better if men and women have set roles. She tells the women in the audience that to not shave their pubic hair is being disrespectful to their body by turning it into a billboard for the equal rights movement. She advises women that not removing all their hair is “unhygienic” and “unnatural.” Her penchant for the offensive goes further as she slams motherhood by saying, ”Pregnant women are disgusting...A woman’s body that has had a child is a waste of a body.”

Ellemark makes it clear that her sexuality cannot exist without a man, saying that she will never touch herself ever unless it is to turn on her boyfriend. She tells a story of how pleased she was by a man who approached her in a café and asked her to come have sex with him by saying, “I was flattered. What respect. A+.” As Ellemark’s discussion of sex and her fondness for sexually pleasing men goes further, she humorously makes the men in the audience feel uncomfortable. She approaches them, locks eyes with them, asks them sexual questions, all while making them look away awkwardly as she openly objectifies herself. She tells the men in the audience to come and take her sexually, sits down in a chair, spreads her legs, says that she is wet and says, “Exercise your right as a man and take me.” When she segues into a strip tease she keeps eye contact the entire time with one man in the audience (to whom she has been directing pointed questions all night), clearly making him uncomfortable as she takes off her clothes and poses in a number of sexual positions.

How should I interpret this show? What is Ellemark’s message within this highly offensive piece? My guess is that Ellemark is embodying the female ideal expressed by men in pornography and other forms of media: a woman who is ready to serve men sexually and has no demands or needs of her own. I would assume that Ellemark’s show is a criticism of male chauvinistic culture and the way that women are depicted misogynistically as sexual objects to be used up and thrown away. I would suggest that making the fact that the play is satirical more obvious might have made its message/tone stronger (some of the post-show discussion among male audience members led me to believe they took it at face value). Regardless of what Ellemark’s true intention is, (I was tempted to approach her after the show and ask her) this show is a powerful attention getter that produced much laughter and discomfort. If Ellemark’s motivation was to make the audience uncomfortable, she certainly succeeded. Surely this show will start many conversations.