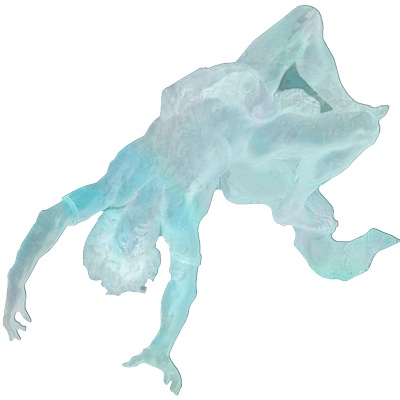 BOTTOM LINE: A very meta piece about art and class structure with a large energetic ensemble.

Freefall Frostbite opens on a line of people waiting to gain entrance to the very exclusive club Home. On the same block is a small group of homeless people, led by Mark Curtis Ferrando, warming themselves by a fire in a trash bin. Ferrando is somewhat of a mix of Pippin’s Leading Player and Godspell’s Jesus, both narrating directly to the audience as well as leading his tribe in their taunts of the line attempting to be in the 1%. The line doesn’t move and those waiting get increasingly uneasy as it appears none of them are on the list.

Our central characters in the queue are Steven (Steve Liskiewicz) and Sharon (Juliet Fixel, also the director/choreographer). Steven is convinced that they will eventually get in as long as they don’t step out of line, while Susan begins to doubt the foundations of their relationship as the taunting of the Homeless becomes less entertaining and more aggressive.

Through the first act, we are then visited by a Violinist, a Rising Star and a Scholar. These three present their views on life and art before one by one being devoured by the Homeless and becoming part of that throng. It seems they are much happier once they let go of their passions and stop pursuing their goals. Sharon fears that Steven will do the same as he is a writer, and the tug of war continues. Whenever the Homeless need more to burn, they travel through the audience picking up playbills and ticket stubs from the seats before bringing someone else off of the line into their clutches.

In the second act, Susan exits for a cigarette -- she is the central character in Steven’s story and this final blow convinces Sharon to join the Homeless as well. By this juncture the entire line has dissipated leaving Steven alone. The Leader of the homeless has found Steven’s script backstage and basically declares it drivel, saying that ‘no one here is enjoying themselves’ with an accusatory glance towards the audience. Steven never fully gives in to the throng but after they strip him of his script, his clothes and his desire to live they disappear off the stage throughout a final dance number leaving him alone and without accompaniment or a spotlight.

The piece overall felt as though it was the theatrical equivalent of the Occupy Wall Street movement, with frequent references to the 99% and the 1%. As the archetypes joined the 99% they seemed more content and spoke with their own voices. I’m not entirely certain if this was indeed the message that the team was putting forth, but it’s what I was able to take away from it. In fact, the synopsis above is just from my perspective. In the director’s notes in the program it is stated, "We will accuse you, we will accost you, and we will dare you not to reevalute your own life," so I believe part of the challenge presented was indeed for every audience member to go on a different journey.

(Freefall Frostbite played at The Ellen Stewart Theatre at La MaMa, through August 12, 2013. Tickets were $15 in advance, $18 at the door and were available at fringenyc.org or by calling 866.468.7619. For more show information visit paralleluniversetheaterresources.com.)