Written and Performed by Lee Kaplan; Directed by Padraic Lillis 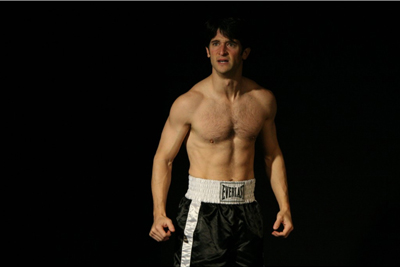 BOTTOM LINE: A fantastic solo show that is both emotionally impactful and high energy.

There are a lot of things to really like about Bully, Lee Kaplan’s solo show that just wrapped up its engagement at the New York International Fringe Festival, but what is most likeable about the show is Lee himself. Which makes the story of his years of abuse by a handful of childhood bullies all the more excruciating to endure.

Framed as a workout session, Kaplan shares excerpts from his childhood journal as he prepares to confront each of the bullies that tormented his past, and, not surprisingly, continue to run rough shot on his confidence and self-esteem. What I really love about this show is that it is not just a victim’s tale. Kaplan uses his time on stage to confront the bullies, but also to confront his childhood self. He takes ownership of his past, not to discount or ignore it, but as a tool to heal and move forward in his life. In an incredibly emotional and impactful moment, adult Lee address his teenage self, sharing with him the wisdom and insight that can only come with age. It doesn’t erase what happened to him all those years ago, but it is certainly a way to find peace.

I hope this show lives on past summer festivals. It seems tailor-made to tour the schools of this country, speaking to our kids about the real damage that bullying can cause. And we are all involved one way or another. Some of us were bullied, some of us were the bullies, some of us were caught in between. Perhaps this show speaks most poignantly to the innocent bystanders. Those of us who saw what was happening to our friends and classmates, and because of our own fears and insecurities, chose to do nothing. It is in spite of this abuse, not because of it, that Lee turned out to be such a likeable guy.

(Bully played at The Steve and Marie Sgouros Theatre through August 21, 2013. Tickets were $15 in advance, $18 at the door and were available at fringenyc.org or by calling 866-468-7619. More information is available at standuptothebully.com.)