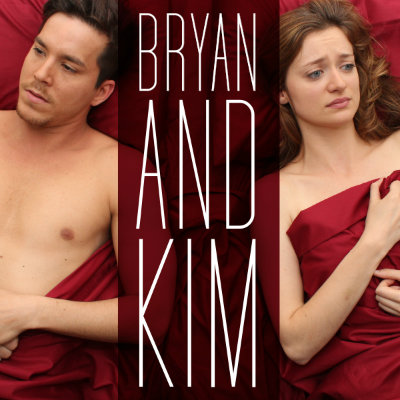 Misha Braun and Laurel Casillo in BRYAN AND KIM.

BOTTOM LINE: This play tells an emotionally powerful story of a couple's struggle to overcome the ramifications of sexual assault.

Choosing which Fringe plays to see can be a gamble: having only the brief descriptions listed in the guide, it can be hard to discern just which of the plays will be this year’s gems. Bryan and Kim is one of those gems, one of the reasons people take a chance on the Fringe’s offerings. The line around the block, the standing ovation, and the tears in the eyes of much of the audience all show what a powerful effect this show has.

The plot to Bryan and Kim is a simple one consisting of an everyday tragedy. It opens with the couple sitting in separate therapy sessions spelling out the terrible event that has destroyed their once happy relationship. The play then jumps back in time to show us how they met and how happy their relationship once was. Everything is shattered when Bryan (Misha Braun) notices Kim (Laurel Casillo) is visibly upset and she reveals that it is the one year anniversary of her rape. Suddenly everything this couple has built disintegrates. Kim begins to have flashbacks of her rape and no longer can hold herself together. Her sex life with Bryan becomes problematic: when she shows any interest in sex she encourages a domination that echoes her attack and Bryan feels horrified, telling Kim that “I feel like I’m raping you.” The home they share is torn apart with Kim constantly needing privacy and not wanting Bryan around. Kim needs to regain control of her life and her emotions and feels unable to hold herself together. Bryan feels lost and begins to look towards another woman for comfort.

The strength of Bryan and Kim lies in the knockout performances by both Misha Braun and Laurel Casillo. Braun portrays Bryan as a man with a tough façade that begins to crack when Kim’s troubled state triggers his own emotions. Bryan wants to save Kim and avenge her attack, but is unable to help her the way he wants to. Casillo captures Kim’s victimized state, capturing her emotional turmoil with wide eyes. With the guidance of writer and director Adam Delia, both actors give convincing and nuanced performances that feel authentic and are moving in their raw emotion.

While the play is certainly riveting from start to finish, there are a few areas where the script could be strengthened. The timing of Kim’s rape is a bit confusing for example: was this a trauma she endured before meeting Bryan or something that happened during the relationship? More attention could also be paid to the sexual dynamic of the couple before their disintegration.

Overall, this show is a powerful one that gives Casillo and Braun an opportunity to showcase their obvious talent. Although the play is only 45 minutes, it feels much longer due to the emotions and drama that unfold on stage. Delia has created a script that deals with a dramatic situation in a realistic and convincing way. I hope Bryan and Kim returns to the stage in September with the Fringe Encore Series (the show got my vote for this year’s audience favorite.)