Another Evening of Awkward Romance 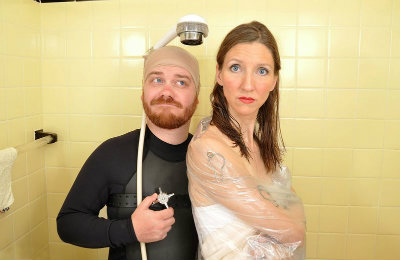 Aaron Phillips and Wendy Herlich in ANOTHER EVENING OF AWKWARD ROMANCE. Photo by Mickey Kerr.

BOTTOM LINE: There’s bound to be at least one sequence everyone can enjoy in this cycle of amusing and poignant stories.

I tend not to be a fan of performers appearing in work they have written or directed, but in the case of Wendy Herlich and Another Evening of Awkward Romance it works just fine. Herlich is both a clever writer and a flexible, accessible performer. Whether playing an insecure college girl or a woman living with a disease that causes her to act like a character from 1950s film noir, Herlich captures the attention of the audience and the voice of her characters flows with perfect pitch.

Seven short scenes interspersed with videos showing what happens next for several of the couples pass by in a quick effortless evening. While some of the situations may be more captivating than others there is certain to be at least one that will resonate strongly with every member of the audience. For me, it was the more off-kilter sequence between two auctioneers who ricocheted through dating, marriage and divorce as though they were selling their lives on the stand. I found myself shedding quite a few tears throughout that sequence as bizarre as the whole conceit was.

Herlich’s co-star Aaron Phillips has a great deal of chemistry with Herlich and his shortness of stature was used to great effect in Ruthie Levy’s direction. Watching the two trade off positions of dominance in their varied relationships was a fun ride throughout. Phillips’s strongest moment for me however was in the video follow-ups, particularly his defeated showerhead costuming in a Halloween party.