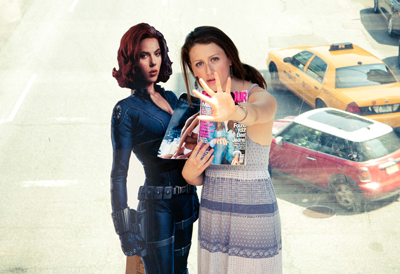 BOTTOM LINE: A modern comedy for real people -- particularly real people who like pop culture -- produced by a highly skilled group of artists.

As I took my seat at the Soho Playhouse last night I was acutely aware of the energy in the space. It could’ve been the clubby pre-show music (“I Gotta Feeling,” and that one song the hamsters dance to in that commercial), or it could’ve been the chatty atmosphere, made up primarily of well-coiffed pretty people. All I know is, I was already in a good mood as I coveted the take-out sushi being enjoyed by the couple in front of me.

Scarlett Fever is so funny and so enjoyable that the energy merely escalated from there. Feeling more like an intelligent sitcom than a piece of theatre, it is full of jokes that land, delivered by underdog characters with whom you instantly sympathize. I have to believe that a major component of this show’s success is its actors. This cast gets comedy, and they know how to intertwine humor into their performances without asking for laughs. The script is in very good hands and director Ashley Rodbro knows just how keep it all rolling nicely along.

Pop culture-crazed Gracie (Alex Trow) has just graduated from college and moved to New York City. She attends a party with her gay best friend Joey (Andy Sandberg), who works for Elle Magazine and often hobnobs with the rich and famous. There she meets Hunter (Patrick Knighton), an attractive and weirdly mysterious guy with whom she starts a relationship. Unbeknownst to her, Hunter is deeply connected to the celebrity sect and her lady crush, Scarlett Johansson, in particular.

While Gracie tries to negotiate a relationship with Hunter, who would rather ignore his celeb affiliation, Joey pines over Coffee Guy (Charles Andrew Callaghan), the local barista who knows so much about his clientele he is eventually able to save the day.

Scarlett Fever’s plot is thin, and the dramatic stakes aren’t necessarily gripping. But the characters are so magnetic and the humor is so engaging that I was very happy to watch it all unfold. Trow is a delight as Gracie, nabbing some of that Lena Dunham (of HBO’s Girls) goofball realness. In all of the relationships in this play, there is an underlying sense of awkwardness that rings all too true. My only beef with this show is the grandiose caricatures of Joey’s vapid roommate Natalia (Jordy Lievers) and Gracie’s stoner ex-boyfriend Eddie (Bill Coyne). Though both actors do good work bringing these people to life, the characters are so one-dimensional and so unlikeable that it’s hard to believe Gracie and Joey would associate with them in the first place.

Scarlett Fever is very funny and it’s easy to lose yourself in the humor. Paced with precision, it’s a show that encourages you to sit back and relax, while its smart banter keeps your brain engaged. And with its stellar ensemble cast (seriously, they nail it), it’s hard to not be charmed.

(Scarlett Fever plays at the Soho Playhouse, 15 Vandam Street, through August 25, 2012. Remaining performances are August 23rd at 6:45PM, August 24th at 7PM, and August 25th at 3PM. Tickets are $15 in advance and $18 at the door. To purchase tickets visit fringenyc.org. For more show info visit scarlettfevershow.com.)