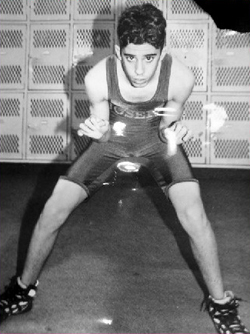 BOTTOM LINE: Armando Merlo's performance is more chameleon than salamander as he skillfully portrays the colorful characters in his heartfelt solo show.

Ah, the autobiographical solo show: a genre that can go so wrong in so many vanity project-y ways if the story is not worth telling. Luckily for audiences at Salamander Starts Over, playwright and performer Armando Merlo communicates a worthwhile message in this wholly endearing homage to his teen years. That message? Our lives are defined by the decisions we make.

Hindsight is 20/20, and Merlo embodies a man who wishes he could travel back in time and tell his younger self a thing or two. Salamander Starts Over revisits Merlo's early juvenile delinquent days, when the middle schooler's recreational activities included all the drugs and alcohol he and his friends could find. His wise and attentive parents were quick to put the cabash on this behavior, and enrolled him in a Catholic high school. Though this seemed like the kiss of death at first, the wrestling team helped ease Merlo into his new life. And with age and wisdom came the understanding that his parents knew what was best for him all along.

The beauty of Salamander Starts Over is in the relationships that Merlo convincingly portrays. He captures the spirit of his parents, his neighborhood friends, the colorful characters on his wrestling team, and various teachers and coaches (from inspiring to boring to downright creepy). The occasional family photo helps add legitimacy to these big personalities. The most impactful of these representations is the embodiment of his mother, an outspoken Cuban with a zest for life despite serious health issues. We get to know her through Merlo, and as we track both of their paths, we get rather attached.

Merlo is a deft character actor, and he is amazingly agile when it comes to quickly switching back and forth between characters. I have to think his wrestling training has something to do with his body awareness, a skill that makes this all incredibly easy to watch. Director Leigh Ann Pedra maximizes the space with Merlo's physicality while keeping the stage free of props and scenery. A simple desk and stool serve as many locales. Projections enhance the design, and they never distract from Merlo's performance.

Salamander Starts Over is a tribute to Merlo's support system, and it is clear that he has much to appreciate. It's never a bad thing to be reminded of the power of our choices.