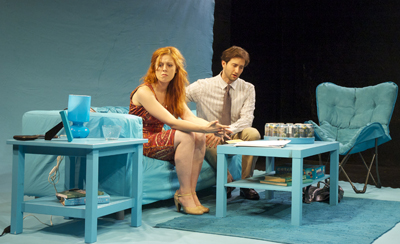 BOTTOM LINE: An exciting and topical play about political values in an age where the internet leaves nothing private.

The NY Fringe Festival always provides a daunting list of plays (upwards of 200) for theatregoers to weed through. For those in hopes of any guidance, please allow this critic to steer you towards the topical production of Matthew Greene’s #MormonInChief, a politically motivated play concerned with duplicitous politicians and their “followers” in the Twitterverse.

Greene’s play deals with the backlash after one follower in particular, Connor Jorgensen (Jesse Liebman), casually tweets his support for the Mormon presidential candidate Mitt...forgive me...Mac Benson, who states his plans in a private church meeting to restore America from the corruption of “gays, illegals, and bleeding hearts.” Media frenzy ensues, championed by the leftist blogger Lydia Strout (Nicole Rodenburg), and the formerly invisible Jorgensen is thrust into the spotlight. The play scrutinizes the political power climb, where inconvenient beliefs are often shed for political gain, and words are flexible depending on the listening audience. Do we seek leaders who courageously stand behind their beliefs? Or would we prefer those who conveniently adapt and try to appeal to the majority under the umbrella of their allied political party?

The production is engaging. Director Austin Regan propells Greene's dialogue swiftly along, keeping the play moving at a pace that rivals the speed of electronic media. The play is set in Jorgensen’s monochromatic baby-blue apartment (designed by Jason Ardizzone-West), but the production is interspersed with blog posts realized through a series of abstract internet projections (by David Bengali), cleverly setting the play’s two worlds apart. Jorgensen’s quiet life is clearly at odds with the high-tech, rapid blogosphere, not to mention the unyielding (and left-wing) blogger Lydia Strout.

The subject matter and execution of the play make it a captivating evening, and the individual performances drive it home. Liebman’s unflinchingly innocent portrayal of the Mormon tweeter spars delightfully with the hard-nosed and shrewd blogger/journalist performed so keenly by Rodenburg. Karis Danish similarly charms as Connor’s Mormon friend Kate, and brings spunky energy, humor, and another political outlook to the production.

There are some moments when the play meanders or seems a tad repetitive, but at this stage of the development game #MormonInChief is in great shape, and hopefully will keep moving forward. What is most interesting is that Greene writes a liberal-sounding text, where the central character seeks to perpetuate conservative values. The result is a bipartisan play that asks for honesty and courage of conviction from our leaders regardless of their political affiliations.

(#MormonInChief plays at the Kraine Theater, 85 East 4th Street, through August 22, 2012. Remaining performance is August 22nd at 2:30PM. Tickets are $15 in advance or $18 at the door and are available at fringenyc.org. More information is available at mormoninchiefplay.com.)