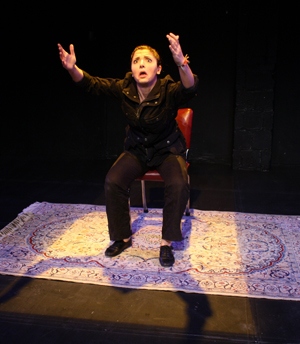 BOTTOM LINE: A touching and funny look at the ways racism, classism, sexism, and sexual preference intertwine in the lives of three disparate characters, all played by a gender-bending Tara Grammy.

Tara Grammy’s one-woman show seamlessly introduces Mahmoud, a middle-aged cabdriver who arrived in Toronto 25 years ago, PhD. in-hand; Tara, a 12-year-old middle schooler who grows up to become an aspiring actor; and Emanuelos, a gay Latino cologne salesman who is madly in love with his Iranian boyfriend. Similar to Sarah Jones and Anna Deavere Smith, the Tehran-born Grammy switches personas with ease and her rendition of each character is flawlessly delivered. The stories are also powerful — at first played for laughs but later getting at some of the cultural and generational dissonance that impacts immigrant lives.

Mahmoud, for example, is eager to boast about his country’s rich history to all who enter his car. At the same time, despite decades abroad, memories of the Islamic Revolution’s brutality continue to haunt him and he has made peace with the fact that he and his wife will never return to their homeland. Character Tara, whose story likely overlaps with the actor/playwright’s, cannot understand how a man with a doctorate in engineering can be so accepting of his fallen status. For her, a child of relative privilege, the romance of the motherland trumps all. When she asks Mahmoud why he doesn’t return to Iran to help “the people,” his answer is matter-of-fact: “I am missing Iran every minute,” he explains. “Everyone here thinks I’m Arab, that I am making some kind of jihad.” Still, he adds, “there is freedom here.” In this, the play’s most poignant moment, Mahmoud’s sadness is so palpable and so simply declared that it comes across as personal heartache, the detritus of politics. “I am the engineer of the taxi,” Mahmoud sighs.

For his part Emanuelos pines for his boyfriend, in Iran for a funeral, and can’t understand why said BF has yet to tell his family about their romantic entanglement. Suffice it to say that the homophobia endemic to Persian culture is showcased, but again, it is done without a hint of preachiness or cant.

And then there’s Tara, whose over-the-top coming-of-age melodramas are both hilarious and moving. Like all kids, Tara wants to fit in and agonizes over the black eyes and hair that seem far from the blonde, blue-eyed ideal of her classmates. A decade later, her appearance continues to plague her and a conversation with a prominent agent who looks her up-and-down only to declare that she might be cast in “sexy foreign vixen stuff...as the girl next door terrorist” brings the intersection of gender, ethnicity, and race into sharp relief.

Although some of this sounds cliched, it’s not. In fact, sharp writing upends expectations and turns stereotypes on their ear. Credit for this rests, at least in part, with the play’s backdrop — the aftermath of the 2009 Iranian elections. As sound bites from Green Revolution protests play, the audience is reminded that history is lived as well as studied.

The melding of personal and political concerns makes Mahmoud a valuable and important production. While the meaning of the final scene is ambiguous, Grammy’s dramatic and comedic chops are impressive and the show is both entertaining and thought-provoking. Small wonder that it won kudos at the Toronto Fringe Festival earlier this year.

(Mahmoud plays at Jimmy’s No. 43, 43 East 7th Street, through August 25, 2012. Remaining performances are August 24th at 5PM, and August 25th at 7PM. Tickets are $15 in advance or $18 at the door and are available at www.fringenyc.org. More information is available at www.mahmoudtaxi.com.

The playwright, director, and producers are dedicating the production of Mahmoud to victims of the recent earthquake in northern Iran. They are also asking audience to go to www.niacouncil.org to urge the US and other nations to lift sanctions against the country so that necessary relief supplies can be delivered.