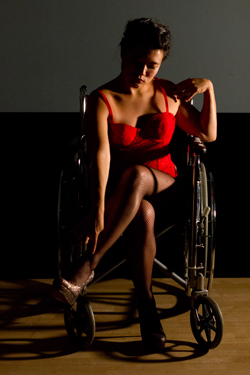 BOTTOM LINE: This play's unusual story centers on a parapelegic burlesque dancer torn between her male and female love interests. By blending drama, comedy, burlesque, and cabaret number,s this unique production succeeds in being consistently enthralling.

At the center of Magic Trick is Bana (Diana Oh), a wheel chair bound parapelegic whose sassy attitude and desire for independence makes her minimize the impedement of her physical disability as much as possible. Bana spends her time cruising through bars and meeting dates off of the internet. Eventually she meets Eric (Nic Grelli) and the two embark on a passionate sexual relationship which hits a few snags when Eric shows a desire to control Bana despite her fierce desire for independence and power. The two take a liking to burlesque performer Clara (Kim Gainer) and attempt to talk her into coming home with them for a threesome. Clara ultimately declines, but both Eric and Bana find themselves entangled with this unstable but enigmatic woman when Bana unexpectedly leaves Eric in the middle of the night. Clara helps Bana find herself as a burlesque dancer, which enables her to feel more empowered in her body despite her disability, as well as more confident in flaunting her sexuality.

The events that unfold in Magic Trick are not told chronologically -- they jump back and forth in time -- which helps make the story more engaging and faster paced, but sometimes left me confused as to just when certain relationships and situations began. The play's multiple musical and burlesque numbers were entirely engrossing, with even Grelli showing that men can be talented burlesque performers as well. The sexual pulse running through this play remains constant, thanks in part to the many intricate burlesque costumes worn by Gainer, and to the performers ripping off their clothing and tossing them into the audience (one dedicated audience member made a habit of swiping the brassieres that flew to the ground unnoticed.) It was also captivating to view a disabled main character as this issue is not one often explored theatrically (nor in a way that dodges the pitfalls of sentimentality.)

Unlike many of the other plays included within the Fringe Festival, Magic Trick feels more like a fully completed project capable of standing on its own. This is due in part to the fact that it clocks in at a whopping 2 hours and 40 minutes, and covers two acts with an intermission, whereas many of the plays in the Fringe are only one act and clock in at an hour or less. The characters and plotlines within the work are also fully fleshed out and nuanced, aided perhaps by a longer show time enabling each character to be fully explored on stage. Each of the performers in the play shows a great deal of talent. Oh in particular showed herself to be both a gifted actress as well as a talented singer. Magic Trick offers the kind of unusual, off-kilter story that downtown theater is known for and we can only hope it returns to the stage even after the festival has closed, as it is deserving of its own lengthier run.

(Magic Trick plays at HERE Mainstage Theatre, 145 Sixth Avenue, through August 25, 2012. Tickets are $15 in advance or $18 at the door. For more show info visit capslocktheatre.com.)