Written and Directed by Larissa Wise 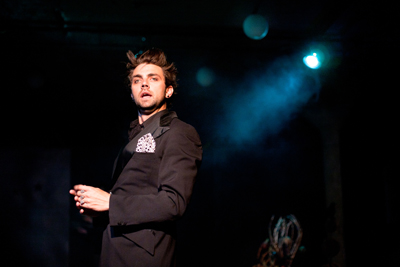 BOTTOM LINE: This fanciful, surreal play explores what happens when a gloomy, graveyard dwelling man falls in love with a sunny, flower garden dwelling woman. Although mostly humorous and dreamy, this play also touches on the darker realities of love and sexuality.

If Tim Burton made a play about love, it might be a lot like LoveSick, a play that explores what happens when Benjamin (Adam Chambers) a gloomy, graveyard-dwelling man with a love for depression and the morbid, somehow finds himself attracted to Sophia (Larissa Wise, who also wrote and directed the play), a sunny girl who spends her days dancing with flowers. Benjamin spends his days reminiscing about how much more dramatic his childhood depression was, and finds himself bored as he hangs out in the graveyard with his two morose friends (Matt McCroskey and Noah Benjamin). One day the three men are startled when a trio of women dressed as wood nymphs dance past them, laying colorful flowers on the graves. One of the women, Sophia, catches his interest, something he himself is surprised by considering his love for all things dark and dreary. As much as Benjamin complains about her cheeriness he finds himself obsessed, clutching a pink scarf that falls off her skirt. Benjamin reasons that he should be more drawn to a woman like Sally (Joy Howard), an equally dark woman who visits the graveyard to spout poetry about death and murder while describing her work pulling the eyes out of dolls to create an Oedipus-themed project. But Benjamin somewhat rudely shoves aside Sally's advances as he longs for the nights when Sophia will return to his graveyard and he can once again attempt some semblance of conversation with her.

Meanwhile, Frank (who comes replete with his own theme song announcing he is a jerk) has his eyes on Sophia, looking to fulfill his momentary sexual fixation with her. Soon both Benjamin and Frank are staking out Sophia's home hoping to find their way into her heart (or at least in Frank's case, her bed). Sophia reveals to her equally sunny and flowery friends (Marishesa Galloway and Jessica Botello) that she too finds herself strangely drawn to Benjamin despite their obviously differing dispositions. The play hints at realism and drama as Sophia and Benjamin both recall their parents, who had such severe issues with love and sexuality that they succeeded in damaging their children, making them fearful of following their hearts. Benjamin's mother (Vanessa Vaughn) looked for love in all the wrong places, trying to find fullfilment with men who ultimately harm her. In one dramatic scene, a choreographed dance is shown to depict the physical and emotional abuse men inflicted upon her. In another scene she appears shaking and clutching a wine bottle and pills, while she tells him that "love is just a mirage." Sophia's father, meanwhile, was a womanizing musician who abandoned Sophia in search of hunting down new prey. These scenes give a touch of reality to the play despite its constant dream-like feel.

LoveSick evokes a sense of childlike whimsy due to its fanciful story, colorful costumes, and the fact that much of the play is in verse. A starlit night sky and many choreographed dance scenes also make this play a visual joy to behold. This unusual story is thoroughly captivating and never lulls, and is appealing even to more jaded mindsets due to its blending of whimsy and dark drama. Every member of the cast embodies their role fully, knowing how to balance drama and comedy, with Adam Chambers and Larissa Wise shining in particular. Wise proves herself to be able to take on any role in the theater, gifted at acting, writing, and directing. Unlike some of the other shows in FringeNYC, this show feels like a fully fleshed out play on its own. I can only hope that it will come back to the New York stage after the Fringe has run its course.