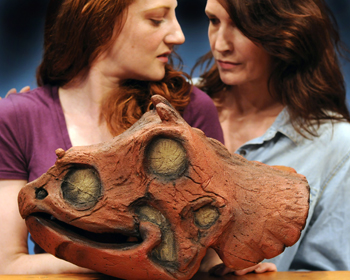 An academic savant is on to something, or she may just be insane. Hadrian's Wall investigates a brilliant scholar's fall from grace and subsequent coping mechanisms. Sounds a little like David Auburn's 2000 play Proof, right? But where Proof tackled math, Hadrian's Wall lets us into the world of archeology. Reclusive Ramona (Laura Siner) was a renowned archeologist, until a stone turned up missing from a dig she was on. Her sympathetic ex-boyfriend David (Eric Rolland) is coincidentally a lawyer, and has been handling her case. Things get complicated when archeology grad student Amy (Rebecca White) shows up at Ramona's apartment. At first just inquisitive into the notorious quasi-criminal's life, Amy can't deny her attraction to Ramona.

Is Ramona guilty? And what happened at the dig site 15 years prior? Playwright Dani Vetere lets the mystery simmer while we learn more about Ramona (the ex-girlfriend, the teacher's pet, the passionate scholar, the unstable recluse, the object of affection). Vetere weaves a tight fabric for these characters and all three actors successfully bring them to life -- with all of life's imperfections. But just like the baby triceratops skull Ramona proudly displays on her desk, we can tell things aren't necessarily in their rightful place.

Hadrian's Wall is intriguing in its academic content, though few specifics are offered to define Ramona's work. Aside from general curiousity, this matters little to the plot because the characters are so rooted in relatable truth, it's easy to believe the professional plague haunting Ramona regardless of the details. The story becomes an interesting one both in its content as well as in its relationships. The scholarly (and ethical) backbone keeps this play from ever being trite.

Definitely a comedy, Hadrian's Wall is full of jokes (all three characters are brimming with wit) though it is paced with a curious amount of caution. As a result, not all of the jokes land, and that's unfortunate because many are quite funny. Director Stephen Cedars stages the play with an attention to economy (particularly with props). This offers a clean interpretation of events, but avoids any discovery into the subtext of the story. What you see is what you get.

Insightful and interesting, Hadrian's Wall is a successful play, and all three actors ably tackle their roles. Also worth noting: Hadrian's Wall is about a lesbian relationship, though it's not a lesbian play. It's awesome to see a minority community represented as is and not as a device. So, props for that too.