Written and Performend by Naomi Grossman; Directed by Richard Embardo 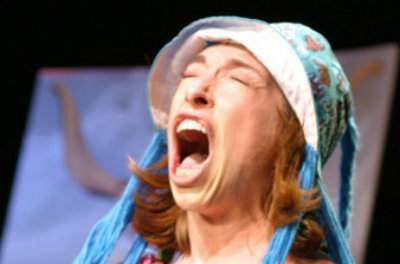 BOTTOM LINE: An endearing tale of an identity crisis, a Latina alter ego and how much darn fun you can have in Argentina.

In a country like the US, where if you go back far enough almost everyone is an immigrant, it’s interesting to hear the identity that people take on. I’ve heard people claim themselves Italian even if their most recent relative to have stepped foot in Italy was their great grandfather. I’ve met Jews who know the same about Judaism as I do about the Higgs Boson, yet cannot fathom any other identity than that of being Jewish. And amongst all this multiculturalism, almost everyone is proud of being American. So while Girl in Argentine Landscape is about a New Mexican teenager who spends her last year at school in Argentina, it manages to stay relevant to those of us who, well, are a little more advanced in years, by addressing the topic of identity and how someone with no roots in Argentina can find themselves perfectly at home there.

Naomi (played by Naomi Grossman) is an over-achieving teenager who has been subjected from a young age to the intense cultural stimuli her parents provide. A straight-A student immersed in every extra-curriculr activity imaginable, she finds an escape from her hectic and stressful lifestyle in the form of a banner encouraging students to spend their last year in Argentina -- the land of beef. Intrigued by the suggestion, she embarks on the journey south. What happens to young Naomi is a wonderful and endearing tale of self exploration -- from her new found anonymity she adopts the form of a raucous Latina alter ago, Carmen Mercedes. Carmen is self confident, a tad sassy and very curious, which provides for some very humorous scenes.

Grossman is very talented -- her solo performance is entertaining and energetic while her script is humorous and witty. The first few scenes rely a little too much on her over-the-top expressiveness, although admittedly they were quite funny. And as if arriving to Argentina and changing her identity brought a new found closeness to her personality, her performance becomes thoroughly engaging and tremendously sincere from that moment on. At times, the acting felt so natural and candid, that I found myself almost thinking of Naomi as a friend.

While this play does raise some interesting questions about identity, it is ultimately light-hearted and fun: you’ll come out feeling good about yourself and of course, wanting to travel to Argentina.

(Girl in Argentine Landscape plays at the Gene Frankel Theatre, 24 Bond Street. Performances are on August 17th at 4PM, August 21st at 9:45PM, and August 23rd at 7PM. Tickets are $15 in advance or $18 at the door. To purchase tickets visit fringenyc.org. For more show info visit naomigrossman.net/Girl_In_Argentine_Landscape.html.)