By Jonathan Alexandratos; Directed by Chrysta Naron
Produced by Playsmiths 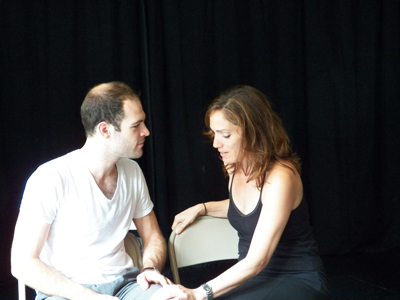 BOTTOM LINE: Intelligence, silliness, and human frailty come together in Chain Reaction, a dark comedy about the men who built the atomic bomb.

What more potent symbol is there for the absurdity of modern life than a nuclear bomb? That absurdity is explored in Chain Reaction, an excellent new play about the scientists working on the Manhattan Project during WWII. The plot follows their efforts to build a weapon that will end the war, and the practical and ethical conundrums that arise once they have “succeeded.” Happily, playwright Jonathan Alexandratos is not only concerned with history and philosophy, but also with humor, despite the weighty subject matter.

As one might expect of a group of men tasked with unlocking the secrets of the universe, there are a lot of big personalities working at Los Alamos. The man in charge, J. Robert Oppenheimer (Paul Corning Jr.), is brilliant but conflicted, driven by his passion for physics but anxious about the implications of his work. The bitter, humorless Edward Teller (James Nugent) has no such qualms and is mainly out to prove he’s a better physicist than Niels Bohr (Michael Selkirk), the Nobel Prize winner Teller sees as a rival. When Bohr arrives in New Mexico to share his expertise, tensions run even higher, greatly annoying General Leslie Groves (Dustye Winniford), the top military man on the project.

Both Oppenheimer and Bohr are torn between their professional and personal lives: the former is carrying on an affair with Jean Tatlock (Sandy Oppedisano), an emotionally unstable physician, while the latter fears that his work has irreparably damaged his relationship with his son Aage (Gary G. Howell), who has followed his father into a career in science. Both men are uneasy about what will happen once the atomic bomb is built. In physics and in daily life, unintended consequences follow even the noblest of actions or the purest of intentions.

So where’s the comedy? Much of it comes from the antics of two “agents” in trench coats who periodically burst in on the central characters and shake things up; Gregory Kostal and Mary Catherine Wilson deliver the duo’s corny one-liners and jingoistic claptrap with just the right touch. Throughout the play, puns, miscommunications and visual jokes abound (a dartboard emblazoned with Hitler’s face, a lab technician reenacting King Kong in the midst of a nuclear experiment). The significance of the work being done at Los Alamos is contrasted with the banality of the scientists’ conversations, conflicts, and daily routines.

Chain Reaction is solid from first to last despite having the merest skeleton of an actual production. It needs more rehearsal, a stronger directorial hand, and better light and sound design. This is not a show for those hoping to be wowed by awesome (or even good) production values. But the combination of a fascinating true story (remarkably faithful to history, save for the events surrounding Oppenheimer’s affair with Tatlock) with a witty and intelligent script keeps you hooked until the final scene, which takes place in the present day; it reminds us that Manhattan Project turned the world inside out, and we are still coping with the fallout.

(Chain Reaction plays at the Kraine Theater, 85 East 4th Street between 2nd Avenue and the Bowery, through August 26, 2012. Remaining performances are August 23rd at 2PM, August 24th at 8PM, and August 26th at 12PM. Tickets are $15 in advance and $18 at the door. To purchase tickets visit fringenyc.org. For more show info visit chainreactiontheplay.com.)