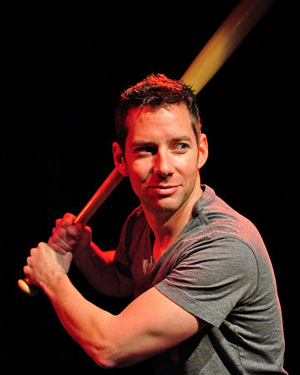 Premiering in New York after sold-out West Coast engagements, Vincent James Arcuri’s one-man autodrama Becoming Butch explores a lifelong struggle with sexuality and masculinity. Arcuri takes the audience on a journey that begins with his birth and ends in the present day. A fey child, Arcuri’s feminine tendencies caused attrition with his relatives, his acting career, and most of all with himself. Will he manage to change himself and become butch? Or will his journey lead him to appreciate his inherent nature?

Arcuri’s natural charm and his script’s easy comedy make for a good time. From the beginning, Arcuri holds the audience in the palm of his hand; the crowd loves him — they hang on his words and wait for the next joke. Becoming Butch is peppered with puns and doses of profundity, creating a subtle balance and constantly changing rewards for the listeners. Arcuri discusses life moments as silly as family baseball humiliations and as serious spiritual revelations. Arcuri isn’t afraid to show the audience his vulnerability, and it is this genuineness that truly seals the audience's favor.

The production makes smart use of projections and sound to enhance the comedy and the story (design by Justin Cornell). The clever staging by director Gary Riotto breaks up both Arcuri’s story and the space where he tells it. The sixty minutes of schtick and sentiment wiz along thanks to this top-notch presentation, which matches easily with Arcuri’s charismatic performance.

Become Butch is an honest, sensitive, and uplifting tale of one man’s experience growing up and growing into himself. The sincerity of the script makes it resonate not only with gay men who had similar experiences struggling with gender roles and self-realization, but also with anyone who has had to come to terms with ALL the elements of their lives and personalities. In that tiny theatre two floors above MacDougal, men and women alike found laughter, catharsis, and recognition in Arcuri’s story.

(Becoming Butch plays at the Steve and Marie Sgouros Theatre, 115 MacDougal Street, 3rd Floor, through August 26, 2012. Remaining performances are August 26th at 12PM. Tickets are $15 in advance and $18 at the door. To purchase tickets visit fringenyc.org. For more show info visit becomingbutch.com.)