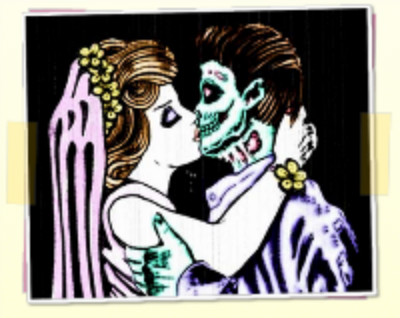 BOTTOM LINE: Campy and charming, this musical about zombies in the 80s is just absurd enough to be amazing.

Given the small budgets, limited run times, and the constraints that come with shared venues, some of the best shows in the Fringe are those that don’t try to do too much. Zombie Wedding is not one of those shows. Instead, it is a power-pop inspired musical about zombies set in the 1980s. It features a live band, screen projections, and a fair amount of makeup and gore effects that only increase the chances that it will collapse into a cringe-worthy mess. But Zombie Wedding thankfully does the opposite: it comes together as a gem of the festival--rough around the edges, but a gem nonetheless.

The story depicts the events leading up to the wedding of Cat (Alison Lea Bender) and Keith (Wes Hart). Just days before the wedding, Keith is infected with the zombie plague. Cat’s old friend Neil (Ryan Nearhoff), who is secretly in love with her, tries to shield her from the reality that her groom is undead and Neil deludes himself into thinking he can solve the problem. By the time the wedding day arrives, most of the wedding party is inevitably infected.

Bender shines as Cat, naive and sweet and blinded by her desire to have a perfect wedding. Nearhoff, too, delivers a stellar performance that culminates with a song-and-dance while he puts on his nurse’s scrubs in a half-baked attempt to play superhero. The major players are supported by a cast of funny friends that seem to be drawn from the archetypes of 80s movies. Sarah Aili is especially charming as Cat’s best friend Deb, whose teased out hair and heavy makeup help bring her trashy, been-around-the-block-wise character to life.

Perhaps one of the most precarious elements of this show is its songs, which intend to draw on the power-pop music of the 1980s. However, Daniel Sturman’s arrangements and R.C. Staab’s lyrics maintain a healthy balance of cheesy camp and clever wording, which works perfectly with the subject matter. The music, combined with a large dose of choreography (also Wes Hart) that makes good use of the jerky zombie movements, makes for some really fun moments, and the final number doesn’t sell short on its potential.

Zombie Wedding is not in its fully realized form here, but seeing new plays performed with a kamikaze attitude is what can make the Fringe so fun. So here’s to hoping that Zombie Wedding will rise again!