Off Off Broadway, Play
Runs through 8.28.11
The Living Theatre, 21 Clinton Street 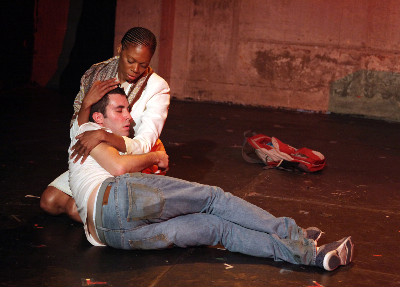 BOTTOM LINE: Inspired by a real experience, Sammy Gets Mugged! is a new play by Dan Heching exploring the emotions and memories connected to the trauma of being robbed.

Sammy Gets Mugged! It’s the title and bottom line in this original script by writer/ actor Dan Heching. After Sammy (Heching) is held up by a mugger (Patrick Byas) in the lobby of his apartment building, he is able to move away physically, but he can’t seem to move on. Through the course of the play, the audience is taken along as Sammy dissects his memories and assumptions about the attack and his attacker, reliving the incident with different variations, confronting the man who mugged him, and re-imagining their relationship. To do this he elicits the help of an ally, Rue Felicite (Stephanie Pope Caffey) who was the only witness to the incident (and represents Sammy’s idea of the neighborhood and the people in it as a whole).

The cast is also fantastic. Dan Heching is charming and funny. Patrick Byas gives a powerful, respectful performance. And Stephanie Pope Caffey is a dynamo as always. Caffey brings charisma, life, and hilarity to every role she plays, and this is no exception. My only complaint: Caffey needs to burn those clunky black sling-backs she wears. They’re terrible, and she’s far too fantastic to be wearing them.

The script for Sammy Gets Mugged! is full of rich, interesting ideas. Since this is a memory play and the characters are just “marbles” in Sammy’s head, the possibilities are endless and fascinating. While the script itself is able to explore these possibilities and variations, the audience is also inspired by the play to examine meanings and interpretations in the relationships Sammy has with his mugger, his former neighborhood, and how these relationships are affected by the imbalances of power created through money, social status, or a box cutter. For instance, I overheard one audience member expounding on a theory that the play is about a white man’s lust for a black man. Another person implied that one of the main themes is liberal white guilt and the condescension inherent in “charity” from haves to have-nots. Personally, I found something evocative about the Freudian implications of the mugger finally giving Sammy the phallic box cutter used to hold him up at the end of the play. All or none of these ideas could be accurate to Heching’s intention, but the point here is that Heching creates such an open, imaginative play in Sammy Gets Mugged! that the audience is free to become invested and to interact on a creative level.

Sammy Gets Mugged! is an inventive, dynamic play with a stellar cast. It’s definitely one of the more solidly artistic piece of theatre in the festival this year. I hope it continues to grow as a piece, allowing a fuller fleshing-out of the ideas and investigations that make this such a cool play.

(SAMMY GETS MUGGED! plays at The Living Theatre, 21 Clinton Street, through August 28, 2011. Remaining performances are Friday, August 26th at 8:45PM; and Sunday, August 28th at 12PM. Tickets are $15 and are available at fringenyc.org. For more show info visit danheching.com/sammygetsmugged/. For more info about FringeNYC visit fringnyc.org.)