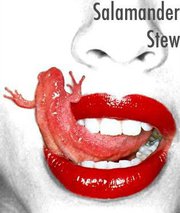 BOTTOM LINE: Performance art with a lot of dance that wants to be more daring than it is.

Salamander Stew is a quick-moving, fantastical trip to the depths of the jungle, with dancing, drumming, and recorded musical accompaniment. There's a lot going on in this energetic production, set to a poetic and rhythmic script that feels like Shakespeare meets Dr. Seuss with a little Tim Burton thrown in for good measure.

Playwright Michael Fixel involves the whole cast in the telling of this story, from the narrators, to the protagonist Steven (Wyland Oyama), to the creatures who inhabit the jungle where Steven gets lost. The ensemble works together to embody the story and physicalize Steven's struggles -- and the torment that awaits him. When a love-interest (succubus, Jezebel, etc.), Susan (Jenna Smith), comes into the picture, Steven's world gets even less reliable. And when starving Steven finally succumbs to the salamander stew, well, his troubles have nearly just begun.

The direction and choreography, by Juliet Fixel and Ron Shreve, are dynamic and aggressive in a good way. The large cast fills out the playing space, compelling you to engage with the movement. The choreography flows with the rhythm of the text, and feels satisfying to experience. When the entire ensemble dances together, the theatre pulses with excitement. Etheral, lyric-less music accompanies the production, always setting the mood.

In terms of visual effect, Salamander Stew sometimes hits the mark, like when red creature eyes take precedence on an otherwise dark stage, experimenting with the creepiness of the jungle at night. But sometimes the show can't fully embody the demonic universe it wants to be. This is partly due to the cast looking like they're collectively plucked from Hairspray or Grease, rather than some wicked netherworld. Salamander Stew is still an enjoyable production, even if it's more innocent than it would probably like to admit.