Off Off Broadway, Play
Runs through 8.27.11
Flamboyan Theater, 107 Suffolk Street 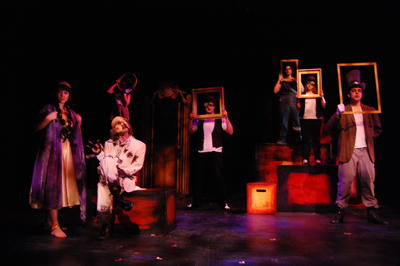 A scene from DREAMPLAY. Photo by Veseth R. Sieu.

In 1901 August Strindberg had a near-psychotic episode that inspired him to bear “the child of [his] greatest pain": A Dream Play, a surrealist, expressionist exploration of human suffering.
In 2011, Joseph Jonah Therrien got an MFA in puppet arts and decided to adapt Strindberg’s work using mostly cardboard, paper maché and burlap. The result: Dreamplay, a visually engrossing societal critique featuring, among other things, a burping sock, 20-foot-tall lawyer jokes, and Mickey Mouse in a gas mask with purple sequined epaulettes.

The plot follows Agnes, daughter of Hindu god Indra, in her quest to ease human misery and redeem our species in the eyes of her father. Along the way she encounters dozens of strange characters. Some are fully formed, but most are archetypes and symbols. In one scene, for example, the four deans of government, big business, religion, and science argue about who gets to take credit for progress. Agnes descends further and further from Heaven until she is literally coated in mud and unable to remember her divine perspective. From such a depth, she can understand our pitiable condition and add her own lamentations to ours.

The costume design is completely bizarre. Some characters are in modern gear while others seem to have fallen out of the Napoleonic wars, Depression-era New York, and a post-apocalyptic rubbish yard. Still, such hodge-podge seems as appropriate in this production as it does in your dreams. The real effect is in the puppetry, anyway. It is stunning. A favorite of mine even had a "telescope view" component.

The actors allow their bodies to sync seamlessly with the masks they wear or to disappear entirely behind the puppet parts they skillfully manipulate. The program advertises Suzuki training; however, while the reference exists in their physicality, the performers are far from masters of the demanding Japanese discipline. Still, as Agnes sagely says "Don’t all creature grumble as they grow?”

If you've never seen a theatrical puppet show before, my best comparison is a particularly lively and virtuosic pop-up book. The delight in design and whimsy feels the same. Plus, it speaks! Go and see Dreamplay. It's a study of old themes in a fresh and youthful wrapping.