Off Off Broadway, Play
Runs through 8.25.11
Players Theatre, 115 MacDougal 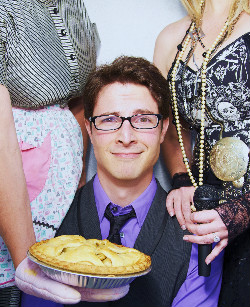 Pulling off a solo show has to be one of the most difficult feats an actor can do. Whereas actors in an ensemble cast have others to carry the weight of the production, a solo performer must maintain the audience’s interest all on their own. Impressively, John Paul Karliak, the writer and performer of the autobiographical one-man show Donna/Madonna, manages to achieve a theatrical experience more engrossing and entertaining than many with larger casts.

As a young boy, Karliak reveals his passion for acting (and perhaps his sexual orientation) when he puts on a show for his parents in drag as Carol Channing. His convincing performance leaves his conservative parents in Scranton, Pennsylvania shocked and horrified. Karliak states that his father’s silent response communicated that he was wondering “how he could beat it out of me without killing me.” His fondness for dressing in drag pops up again as a teenager when he plans to attend a Halloween party as Posh Spice, but hides his costume underneath an inconspicuous Darth Vader outfit. However, despite his mother’s lack of understanding for both his sexuality and his hunger for stardom, he finds her to be a perfect mother. Her skill as a doting housewife causes Karliak to dub her Donna, after Donna Reed.

As an adopted child, Karliak ruminates that perhaps he wasn’t the child his parents were meant to have. Whereas his parents deserve a business school graduating golden boy, he admits that he is instead an effeminate lover of the dramatic arts, dreaming of being an actor. Karliak hopes that he can at least give his parents one thing they deserve: a daughter-in-law and lots of grandchildren “for them to spoil.”  However, when he attempts to have a girlfriend at the age of sixteen he finds himself disgusted by the idea of even touching her breasts. This fact leads him to the realization that he is most likely gay. He breezily calls his girlfriend informing her of the news, telling her that it’s okay because they can just be “shopping buddies.” Unfortunately, his mother overhears the conversation and informs his father of the news.  Karliak feels guilt for disappointing his parents, however, his parents seem to skirt around the issue and shortly thereafter feign ignorance.

Shortly after college, Karliak decides to try to find his birth mother and quickly receives a response. His birth mother, Rose Ellen, turns out to be a glamorous woman who works as a fashion writer and is married to a famous British pop star. While he deemed his adoptive mother Donna, his birth mother quickly earns the moniker of Madonna. Rose Ellen seems to be a more fitting parent for the limelight-hungry Karliak. He praises her sophisticated fashion sense (beginning each enactment of her visits with a detailed description of her outfits), her immediate acceptance of his homosexuality, and her own similar attraction to fame and glamour. A rift arises between Karliak and Donna, when she realizes that Rose Ellen might be a more fitting mother for him than her. However, when Karliak’s first love leaves him for professional opportunities in New York, and he is left suffering from his first broken heart, he finds solace in the woman who saw him through the trials and tribulations of his childhood: his adoptive mother, who surprisingly is more accepting of his sexuality than he had once thought. Karliak realizes that perhaps there is room in his life for both a Donna and a Madonna.

Donna/Madonna never has a lull or dull moment thanks both to Karliak’s gift as a performer and his excellent, joke-laden script. Karliak also shows off his musical skills (and love for classic musical theatre and pop music) by peppering his monologue with musical numbers. This addition adds to the overall infectious energy of the piece. Direction from both Tiger Reel and Matt Craig (who has shown his comedic skill by writing for Saturday Night Live) also enable Karliak to make the most of the stage as he takes on multiple characters and scenarios. Thankfully, Karliak sticks neither solely to humor or poignant drama, instead, mixing the two to create a work that is exceptionally hilarious as well as touching and realistic.