Michael Pope is Gay for Pay

Written by and Starring Michael Pope; Directed by Brianna Olson 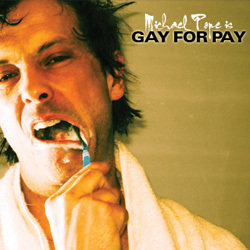 BOTTOM LINE: The very funny story of one man's rise to greatness in the phone sex industry.

In the you-can't-make-this shit-up column of stories worth bringing to the stage, Michael Pope presents an autobiographical tale of his time working as a gay phone sex operator. Pope, age 28 at the time, desperately needed work. An upstart filmmaker, he had exhausted his financial resources and was in dire straits. In situations such as this, Pope tells us, survival instinct can be strong. Sure enough, the natural storyteller was actually quite good at contriving sexy fantasies to his callers. And this 'theatre of the imagination' that his boss boasted actually resonantes as a valuable life skill.

Pope is an engaging performer and Michael Pope is Gay for Pay feels more like straightforward storytelling than a stagy one-man show. At 59E59 Theatres in New York City, where I saw the show premiere last month, the house lights were kept on and the direct connection with Pope allowed for a shared experience, almost more conversational than performed. Director Brianna Olson wisely lets Pope be himself, rather than a theatricized caricature. A stage set with a stool, water bottle and microphone stand evoke a stand-up comedy routine rather than a play, and this serves the story well.

Pope is engaging and endearing, and as he reflects on his 28-year old bourgening-artist self we relate to his sweetly naive but overly cocky personality. We see the Pope of today look back on his on his former self with nostalgic hindsight. And his very dirty lemons-into-lemonade tale is hilarious to hear.

(Michael Pope is Gay for Play plays at the Edinburgh Fringe Festival, at Laughing Horse at the Phoenix, 46 Broughton Street, through August 26, 2012. Performances are August 2nd through 26th at 10:45PM. Tickets are free, and are available at edfringe.com.)