Tickets are £12.00 (concessions available) and are available at edfringe.com 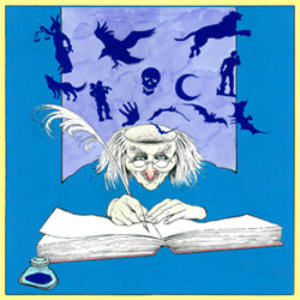 BOTTOM LINE: In addition to the sheer pleasure the title gives to the lips (pronounced “quim-pew”), this intimate opera is purely delightful.

Finding himself thrust unceremoniously into the twilight of life, as tricky time is in the habit of doing, the titular doctor shuffles about his warmly tapestried life uncertainly. Regretful of the life he fears has been wasted, the impact he’s failed to create, Dr. Quimpugh is haunted by furies of guilt and remorse. Fortunately, his two nurses (seemingly both former assistants and now his own caregivers, emphasizing time’s temperamental twists) refuse to allow the doctor to sink into despair. Instead, they bring out the record book of all the cases Dr. Quimpugh’s ever worked on -- psychological studies from religious frenzy in Firenze to foolishly fearful Frenchmen -- in an attempt to remind the good doctor of his abundant accomplishments.

Recreating each office visit, the nurses beautifully transform into a whole host of deliciously damaged individuals, as the doctor grows young and then old again through the course of the evening. The range of impressive vocals, paired with an even more impressive display of dialect and accents incorporated into the operatic singing, is all truly remarkable. The slightly noir and cheeky music, played dutifully by three skillful instrumentalists, evokes an excellently Edward Gorey-type feel.

All in all, this clever and quirky opera is a fine example of a piece accessible and engaging enough for opera-laymen, though with sufficient quality and showmanship to be worthy of the highest praise. Dr. Quimpugh’s Compendium of Peculiar Afflictions is a must-see for music and malady-lovers alike.

(Dr. Quimpugh's Comendium of Peculiar Afflications plays at Summerhall's Main Hall, 1 Summerhall Place, through August 26, 2012. Performances are daily at 5PM (not August 21st). Tickets are £12.00 (concessions available) and are available at edfringe.com.)