Under The Dragon's Tail 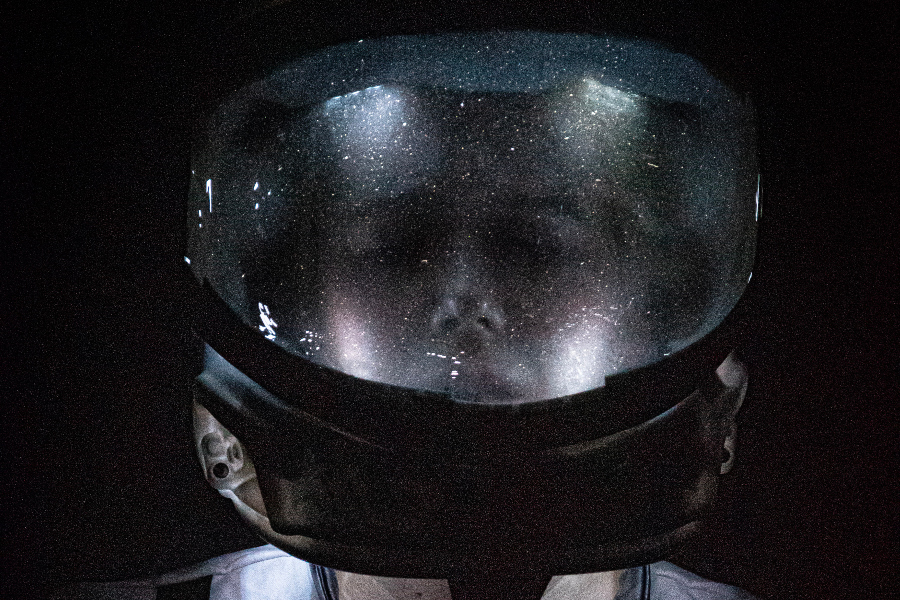 Haley Rice in Letters To A Young Cosmonaut, part of Under The Dragon's Tail. Photo by Felipe Beltran.

BOTTOM LINE: Writer-Director Isaac Byrne brings alive four stories from our past, present, and future in a most visceral and heart-warming way.

Notable director Isaac Byrne makes his playwriting debut with a program of four short plays about people learning to stand up for themselves. The title comes from a quote from King Lear, spoken by Edmund (the bastard, and my near namesake) urging people not to let astrological readings define their life choices. Indeed, in all of the plays there is a reference to dragons, the constellation Draco, and the like, which contrast with an internal struggle, confession under torture, or violent altercation. Ancient heroes facing cancel culture, young women try to escape a small town by any means necessary, an introvert cosmonaut, and two lovers who treasure their past more than their future all find novel ways to ask—how can it be worthwhile for humans to live together?

In Ophiology—named for the study of snakes—we enter midway into the aftermath of a bloody murder. Three young women are apparently trying to escape from their small town. Are they friends? Are they trying to kill each other? The initial pose of Ace (Aubrey Clyburn) raising a gun in the direction of her friend Reggie (Kat Donachie, understudy for Melissa Matos in the performance I saw) turns out to be directed at a nearby rattlesnake, which Ace kills. Meanwhile Jacky (Danielle Grisko) has already been wounded in a shootout with a cop and begs her friends to be dropped at a hospital. Ace, who comes off as emotionless and calculating, raises red flags for Reggie, who we now see is in love with her. Which is more important, caring words or the ability to shoot a snake in the head in total darkness? Did you know that the head of a rattlesnake can still attack after the body dies? Puzzle out for yourselves what kind of relationship this prefigures.

In The Golden Fleece, the classical hero Jason (Conor M. Hamill) tells his story of fame and decline. Now dressed in overalls with his name on them and looking like a mechanic, Jason tries to clear his name, which mythology and modern feminism has sullied in favor of his ill-treated wife, Medea. Jason’s character arc is indeed complex. Born from royalty, he watched as his father’s throne was usurped, and accepted the challenge of sailing on the Argos with an all-star crew (the names, from Herakles to Orpheus, are impressively included). Jason, who is in the spotlight and appears to be under some kind of magical torture, slowly shifts his narrative to include the great contributions his young bride Medea made to his success. But even after returning victorious to his homeland, Jason was engulfed in scandal and had to flee to Corinth, “the trailer park of Greece,” and agree to marry the local tyrant’s daughter. Whether or not this was done out of self-preservation, Medea took revenge as described by Euripedes. Jason stands before us, quite wretched, wondering how little room there is for humans to be human.

In Letters To A Young Cosmonaut, we see a young adventurer wearing a spacesuit (Haley Rice) about to launch into outer space. She immediately asks not to continue with the mission, which is ignored. While in space, she goes through various stages of introspection, denial, and acceptance, while being fed recorded instructions from mission control (voiced by Ksjusha Povod). This dialogue brings to mind the cruelest kind of solitary confinement. Perhaps there is something so unbearable about living with people on Earth that taking this kind of trip is preferable?

In One, Two, Three, we see the collapse of a relationship told through philosophical arguments and intriguing props. If you've been through an intimate disagreement and have wondered how your partner saw events, this play might prompt further reflection. In this play, two young women enter with travel bags full of artifacts—a cat carrier, a teapot full of figurines, a razor, a cowboy hat—that they share with each other while discussing the difficult episodes in their relationship that they would like their partner to make better. You may notice references (e.g. to Russell’s teapot, Schrödinger’s cat, Occam’s razor) that politely insist the burden of proof is on the speaker and cannot be shifted. This may not always be practicable during emotional feuds, but fortunately the characters are named "Ash” (Evan Simone Frazier) and “Wednesday” (Kat Donachie), perhaps suggesting that while they rid themselves of habits they will not need during the proverbial Lent, they might also resurrect their partnership one day. The wordplay and direction in this piece took me to a place of fluctuation and potential. Well done, all.

Isaac Byrne’s writing and direction show that theater can still be cerebral and gut-wrenching. Joshua Rose’s scenic and lighting design bring us to many far-flung places quite creatively. I have rarely seen so many stars on set; the peace this brings helps to process the brutal and cathartic events that follow. Chris Cornwell’s sound design certainly helps set these moods. Hats off to the entire cast for taking some familiar scenarios to much more real places.

(Under The Dragon’s Tail plays at the Matthew Corozine Studio Theatre, 357 West 36th Street, through August 14, 2022. The running time is 2 hours with an intermission. Performances are Wednesdays and Thursdays at 7; Fridays and Saturdays at 8; and Sundays at 3. No performances Wed 8/3 & 8/10 and Thu 8/4 & 8/11. Tickets are $35 and are available at brownpapertickets.com. For more information visit theatre4thepeople.org.)

Under The Dragon’s Tail is by Isaac Byrne. Directed by Isaac Byrne. Scenic and Lighting Design by Joshua Rose. Sound Design by Chris Cornwell. Stage Manager is Matthew Kiesling. Intimacy Choreographer and Dramaturg is Erika Phoebus.