By Ian Eaton; Directed by Warren Adams
Produced by Houses on the Moon Theater Company

Off Off Broadway, Play
Runs through 5.1.22
The Sheen Center, 18 Bleecker Street 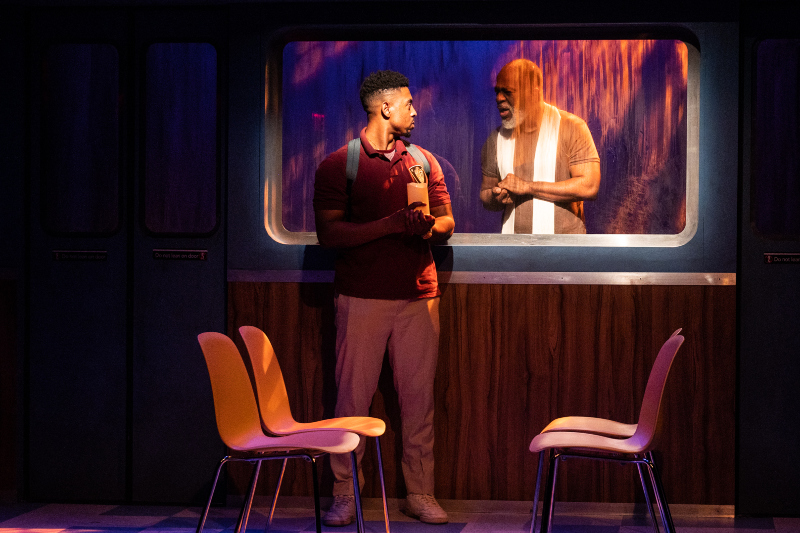 BOTTOM LINE: SuperHero is a beautiful coming-of-age story that, while a little long at times, leaves you with a smile on your face and tears in your eyes.

In 1980s Harlem, young Ian (Bryce Michael Wood) spends his childhood fantasizing about being a superhero. But when tragedy hits, these dreams are shattered. In SuperHero, we watch as Ian carries himself through bullies, strict West Indian parents, and figuring out who he wants to be. Loosely based on playwright Ian Eaton’s experiences, SuperHero makes for an incredibly honest, heartfelt, and sometimes tearful piece of theatre.

SuperHero deals with tragedy, but never lets sadness and grief take over. Its stories are those of a family trying to survive, simply with a love for each other. With Ian as both narrator and main character, we see these relationships through his eyes. And while the characters struggle with each other, SuperHero doesn’t have family conflict simply for the sake of conflict. With so many plays about children and parents at odds or lacking love toward one another, it is refreshing to see one where the love that family members have for each other is front and center.

Aside from Wood's Ian, all cast members play multiple parts of varying ages, and there isn’t a performance that feels stagnant or stale. While no character feels unnecessary, the relationship between Ian and his father (Jeorge Bennet Watson) is especially powerful. We see it blossom from when Ian is six years old up until he’s becoming a young man. And Watson is a particular stand out, deftly balancing the sternness and tenderness of this character. You can see that everything he does is out of love, regardless of how it turns out. As Ian's mom, Valisia Lekae is also a joy to watch. Often the grounding force of the family, Lekae steals moments in every scene she’s in. And SJ Hannah does an excellent job of playing two characters who are very different from each other—Ian’s brother Barry, and his bully Steven.

But perhaps best of all is Bryce Michael Wood, as Ian. Having adults playing children is common enough, but it can be difficult to pull off without seeming stereotypical or silly, yet also without dismissing the often excessive emotions that kids have. Wood lets Ian’s very real emotions and very high stakes shine through. The moment his first narration begins (courtesy of Eaton's beautiful writing), you are drawn in, and almost immediately begin rooting for him.

The set design, by Lawrence E Moten III, does an excellent job of setting up the world. Moten puts us in a New York City subway car, with superhero imagery replacing the advertisements. While the car shifts to become whatever the play needs—home, school, Central Park—Moten's subway concept gives a sense of always trying to move forward, while maybe being stuck in the station. It's a fitting device as we watch Ian struggle with various aspects of his life.

SuperHero isn't perfect. Even after most of the conflicts have been resolved, the show continues on, exploring Ian's relationship with a side character, which all feels somewhat superficial so late in the play. There’s also gun that seems to be a big deal early on, but then disappears later without much acknowledgement. Yet even when SuperHero feels unbalanced, it never stops charming. In particular there are a couple musical sections where characters rap—while these moments come out of nowhere, I’d be lying if I said there wasn’t a smile on my face the whole time.

SuperHero is a beautiful story that will leave you crying one minute and laughing the next. It’s an excellent reminder of how important family is, and reminds us all to keep moving towards our dreams, even if they feel as out of reach as flying.

(SuperHero plays at The Frank Shiner Theater at the Sheen Center, 18 Bleecker Street, through May 1, 2022. The running time is 2 hours with an intermission. Performances are Wednesdays and Thursdays at 7, Fridays at 8 (no performance Friday, April 15), Saturdays at 2 and 8, and Sundays at 3. General admission tickets are $35 and general rush are $20. They can be purchased at houseonthemoon.org.)