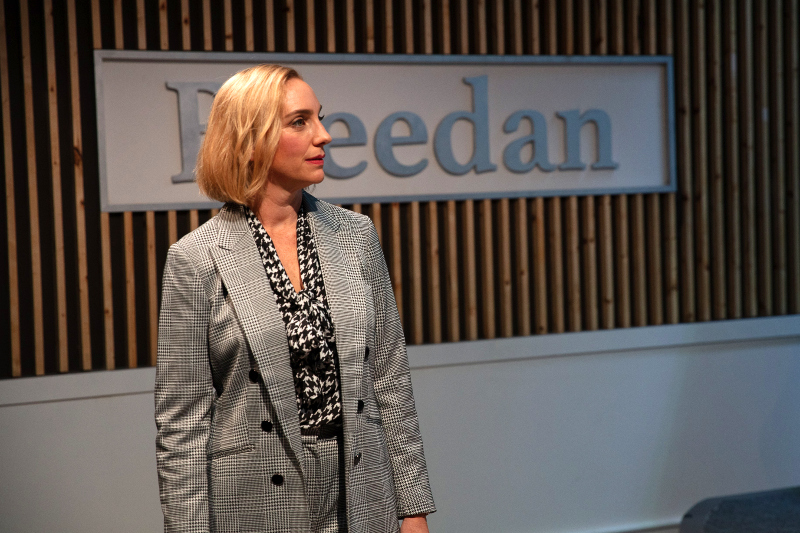 BOTTOM LINE: An accomplished female attorney has an affair with a younger male subordinate; complications ensue.

Regan Van Riper (Laura Shoop) has worked her way up to partner of the prestigious law firm Breedan (presumably a riff on Skadden), having become accomplished enough to give the keynote for the Annual Forum of Women in Big Law. But she is also sleeping with the much younger Guy Stone (Dominick LaRuffa Jr.), who is not only an associate at her firm, but also her mentee. Their encounter is interrupted by ominous calls and texts: leaked information appears to have derailed a big merger, and Guy has been asked to meet with Human Resources on Monday morning. Did someone from the firm see them out at a bar together?

When Guy meets HR chief Janet Shaney (at the performance I saw, understudy Kate Levy gave a wonderful performance) and staff psychologist Meena Cizinski (Jennifer Pierro), he denies “fraternizing” with Regan. Janet and Meena remind Guy that if he conceals information, there will be a full investigation, and his chances of making partner will be compromised. But instead of disciplinary action, head partner Norris Peebles (Jeorge Bennett Watson) practically promises Guy advancement if he illegally records Regan referring to their romantic involvement “orally,” i.e. in words.

But getting lawyers to state anything on the record turns into a disaster. Regan finds the recorder, resents Guy’s betrayal, and then confronts Norris over his failure to investigate her own allegations of sexual harassment way back when. There are further plot twists and ever-changing alliances—we can only hope Regan has good news to relate at the next Annual Forum of Women in Big Law.

Powerhouse is certainly a timely story. David Harms’s fast-paced dialogue is thoughtful, suspenseful, and rich in plot reversals. Ken Wolf's direction helps us to sympathize with all the players in this game, including the morally ambiguous HR folks. Katherine Cartusciello’s financial news-worthy soundtrack helps set the tone pre-show while Sabrinna Fabi's costumes recreate the polished world of Big Law firms. Yang Yu's lighting and Jack C. Golden’s luxurious set bring us to the depths of despair and the heights of a skyscraper office suite. As the cards are gradually stacked against Regan, you may very well wonder how, as posed at the beginning, a woman who is already happy with her career could find a way to raise a family. Would head partner Norris Peebles be expected to help a female attorney advance? Harms addresses this. Fortunately, for a complex story such as this, the real work of envisioning an equitable world is left to the audience.