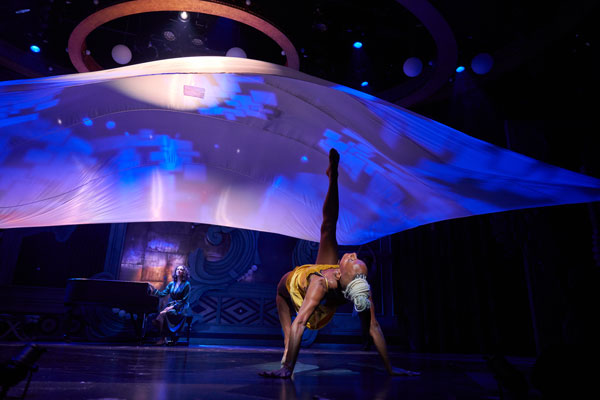 Truth be told, I am not usually a fan of musicals. I am, however, a longtime fan of British musician Kate Nash, known for her sardonic ear worms. So a musical centered around Nash's music, especially one directed and choreographed by Andy Blankenbuehler (the choreographer for Hamilton), was too enticing to pass up. And for the most part, like many (but not all) of the relationships at the center of its fairy-tale plot, this marriage of Blankenbuehler’s vision with Nash’s songs does prove to be a success.

Blankenbuehler's dance musical prioritizes song and movement even more than a traditional book musical, so the story isn't complex. The thin plot is narrated by Nash, who describes the setting of 1928 Paris as a time “when rules were meant to be broken.” King Belenus (Terrence Mann) and Queen Roksana (Karine Plantadit), of the fictional country of Cosimo, have come to Paris to procure everything they need for the arranged marriage of their daughter Tooba (Gaby Diaz) to an entitled count (Tyler Haynes). While the King and Queen each yearn for the days when passion still burned between them, the obviously unhappy Tooba has little interest in royal life (and even less in her betrothed) and expresses a desire to “burn shit to the ground.” So when Jacques (Ryan Steele), a sweet-natured bell hop, is enlisted by the King to show Tooba around town, it is obvious that romance will blossom.

Meanwhile, the King enlists the services of clockmaker Henri (Ryan Vandenboom) to remake a favorite piece of jewelry for Queen Roksana in the hopes of winning back her affections. Henri and his pianist wife Camille (Hannah Cruz) have lived a sensible life, but both long to reclaim the dreams they abandoned. As Henri finds increasing acclaim once he finally gets the chance to realize his artistic visions, Camille longs to step out from behind her husband’s shadow and into the limelight as a musician. When Roksana flees the dullness of royal duties and the coldness of her marriage, she crosses paths with Camille and the two bond over their desire to find fulfillment and passion in their lives.

Ultimately, Only Gold is a simple story of these three couples: some have happy endings, and some don't. But the music and choreography make the show both visually and aurally thrilling. Nash’s songs have her signature punchy delivery (each character sings in her style) but her trademark keyboard has been swapped with somewhat more period-appropriate instruments, merging the 2020s with the 1920s. While the plot does not seem an obvious fit to Nash’s music, Blankenbuehler connects the characters’ defiance to that of Nash's lyrics. This seems to fit especially well with Diaz, who spits out Nash’s words of resilience as she expresses Tooba's rebellion through sharp movements. And in one particularly visually stunning scene, Queen Roksana’s restless night of sleep is portrayed by her dancing with desire and anger beneath a white bedsheet that rises above her into a banner. 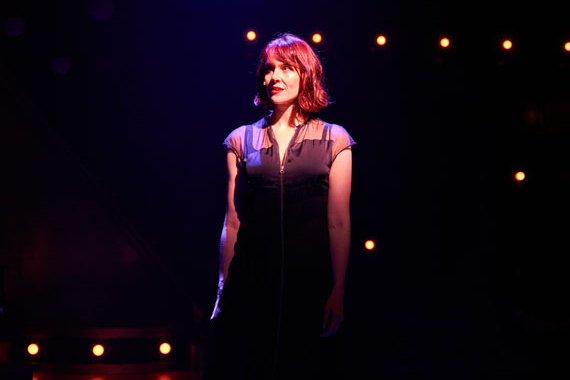 Kate Nash in Only Gold. Photo by Daniel J. Vasquez.

While most of Nash’s songs are sung by the main characters and backed up by the ensemble, she is still very present throughout the show as the narrator. If this seems like an unusual, if perhaps even unnecessary, staging choice, it cements Nash’s creative presence throughout the show (and I for one was pleased to see her singing live.)

Anita Yavich’s costume designs are a standout as they match the tone of music by merging the 1920s with present-day fashions, evoking the edginess of Nash’s lyrics and melodies. David Korins’ scenic design, a shimmering metallic backdrop with a constellation of art deco lights and a gold spiral staircase, evokes past eras of Broadway shows. These designs combine with Blakenbuehler’s fast-paced choreography and Nash’s indie rock-influenced score to create aesthetically and and musically stunning numbers that evoke a sense of nostalgia and magic. Afterwards, walking through the lit streets of nighttime Manhattan, I was left with a lingering sense of wonder, and had the urge to imitate the dancers by twirling my way to the train.

(Only Gold plays at MCC Theater, 511 West 52nd Street, through November 27, 2022. The running time is 2 hours 10 minutes with an intermission. Masks are required. Performances are Tuesdays and Wednesdays at 7, Thursdays and Fridays at 8, Saturdays at 2 and 8, and Sundays at 2. Tickets are $59-$125 and are available at mcctheater.org.)