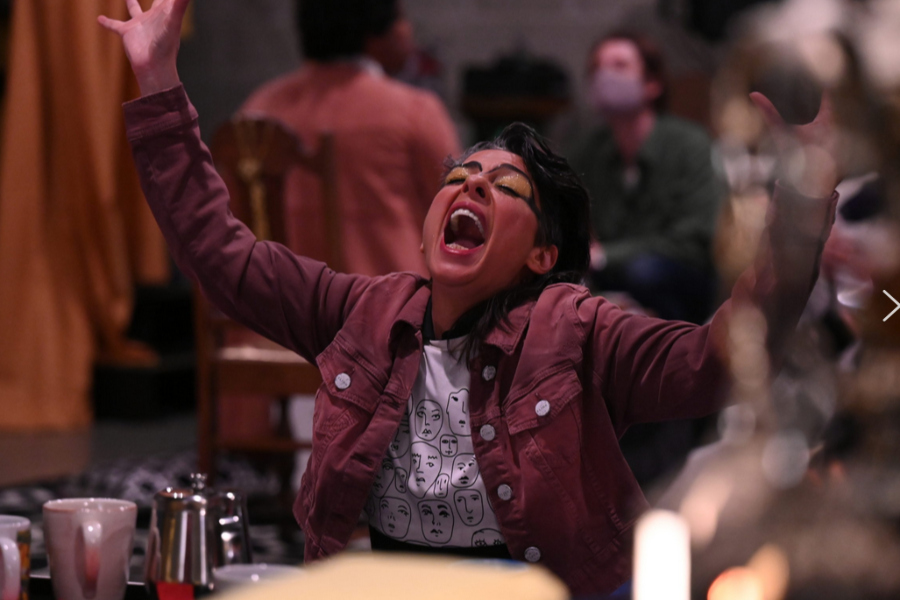 Rawya El Chab in One Night. Photo by Andrew Young.

BOTTOM LINE: A deeply hospitable invitation to meditate on oral storytelling, diaspora, and the ways we build communities around narrative, through the framework of The One Thousand and One Nights.

Walking into the Doxsee Theater, Target Margin’s Sunset Park warehouse-conversion performance space, I was a little apprehensive—was I actually going to sit through nine straight hours of theater? Like many, my attention span has been whittled down to nearly nothing. I can hardly watch a full-length movie without checking my phone, so the prospect of an entire Saturday spent sustaining attention to any story, let alone a retelling of Arabian Nights, seemed a daunting feat of endurance.

Target Margin, it seems, had exactly the same thought. Rather than an onerous day spent inside, what I found instead was a multi-faceted nine-hour experience filled with the mutual regard and hospitality of long weekends spent in the homes of friends, and a study of what stories have done best over millennia.

One Night takes its storytelling conceit from the tale of Scheherazade’s The One Thousand and One Nights (also known as Arabian Nights), the captivating woman storyteller who must continually entertain a king that intends to murder her the next morning. The time we spend with Scheherazade herself is, unsurprisingly, a framing device, not only for the stories she tells but also as a way to discuss the deep research and five-year production process that went into this experience.

More than its plot, One Night is about oral storytelling itself. The cast discusses how the legend has no “true” version but is instead an authorship-free vehicle for many overlapping, diasporic, and at times contradictory visions of the ancient Arab world, and as such is continually in transformation. Their original research also highlights everything from the history of scholarship about oral traditions to the very recent discovery of “new” One Thousand and One Nights stories, and this production is fascinated not only with plot, but the craft of narrative as it is spoken aloud.

The show’s collaborative development extends to its deeply personal performances. While they take on many names and characters within the individual story frames, the actors each inhabit their own storyteller’s persona. Rawya El Chab is a captivating and at times terrifying campfire storyteller, while Anthony Vaughn Merchant’s jovial and meandering style offers audiences a deep comfort. Lianne Elsouki and Sarah Suzuki bring a sharp and exacting wit to their many characters. Ali Andre Ali is the compassionate beating heart of the group, James Tigger! Ferguson adds electric sparkle to every second, and in my production, assistant director Kate Budney injected kindly new life into the room while filling in for performer Lori Vega. The blend of voices carries the larger project as performers speak over and across one another, use slightly different words, or (perhaps deliberately) misremember their lines. Listeners as well as tellers, the performers react with fresh delight to their castmates’ new ideas in real time. In doing so, they model how the performance’s purpose is not virtuosically reciting nine hours of perfect lines, but honoring the sense of story that animates our time together.

One Night includes some classic characters like Aladdin and Ali Baba (while pointing out that these are in fact relatively modern products of Western interests), as well as more complex and unknown tales such as "Sinbad the Sailor" and "Julnar of the Sea." Like many myths, the stories are often baroque and winding, filled with shocking transformations and daring adventures. They are also deeply affecting morality tales. Nor are they all high-fantasy epics: at least one meandering path turned out to be essentially a 20-minute dick joke.

At points you're listening to a podcast or binge-watching a light TV show, then reacting to an office acquaintance’s gossip that fades into a lo-fi student play, then a table reading, then a live-action rendering of a silent film, before finally breaking into a full-scale theatrical production complete with strobe-light-filled dance breaks, prop comedy, and elegant stage magic, before everyone pauses for tea and cookies while short stories are told around a table, and then prepares to do it all over again. Some lines and moments will stick with you while others vanish and become part of the larger wave, and the tales move the hours along as I imagine they have always done in ale halls and around fires on long, dark nights. Every form of community story is represented, as well as the way they are intertwined, exaggerated, forgotten, remembered, and shared again.

One Night is also a love song to diaspora and marginalized communities. Much of the cast notes their ties to the Silk Road region and the Levant in particular, but it speaks to every culture that has found itself scattered and forced to carry its stories into new places as a bulwark against the unknown. While the company fully embraces the poetics of telling stories to save one’s life, they are also clear to note that Scheherazade’s tale of survival is a response to an impossible situation caused by the violence of men in power. Indeed, they remind us that that, too, is a shared experience for many. The company has the time to name all of the complexity that attends One Thousand and One Nights, and gives voice to the colonialism, gender and sexual violence, and deep inequalities embedded in these stories with clarity and care, inviting that difficulty into the room without lingering.

It’s fitting that one of the last sections of One Night tells stories of hospitality, stitching the actors’ lives in with Greek epics to ask what it means to give and receive kindness as strangers. At its core One Night is a deeply hospitable show. The space reflects the production’s focus on care—the performance area consists of comfy couches and beanbags on oversized stitched-together rugs, dotted with traditional stages and white boxes that also perform as tables for food, snacks, and hot tea—and is aided beautifully by the friendly and tireless run crew who attend to audience and performer alike.

While perhaps long and winding storytelling practices aren’t for everyone, the production has gone out of its way to ensure that if you think this might be for you, it is. In its every consideration, Target Margin demonstrates how theaters have always been places of mutual care. One Night aspires not to create a spectacle or brag about feats of endurance on the part of its actors (though a feat surely it is), but to instead invite strangers in to Target Margin’s home, so that we might inhabit other worlds together, for as long as we possibly can.

(One Night plays at Target Margin's Doxsee Theater, 232 52nd Street in Brooklyn, through May 28, 2022. The running time is 9 hours with no intermissions, or 4.5 hours on Tuesdays and Thursdays. Performances are Tuesdays/Thursday at 7 (one performance, split over two nights); Wednesdays at 2; and Saturdays at 2. Special overnight performances on Saturday 4/30 and Saturday 5/4 begin at 8 and conclude at dawn on Sunday. Tickets are $69 to $149 sliding scale. For tickets and more information visit targetmargin.org.)