For more information on BAM's Next Wave Festival, visit bam.org 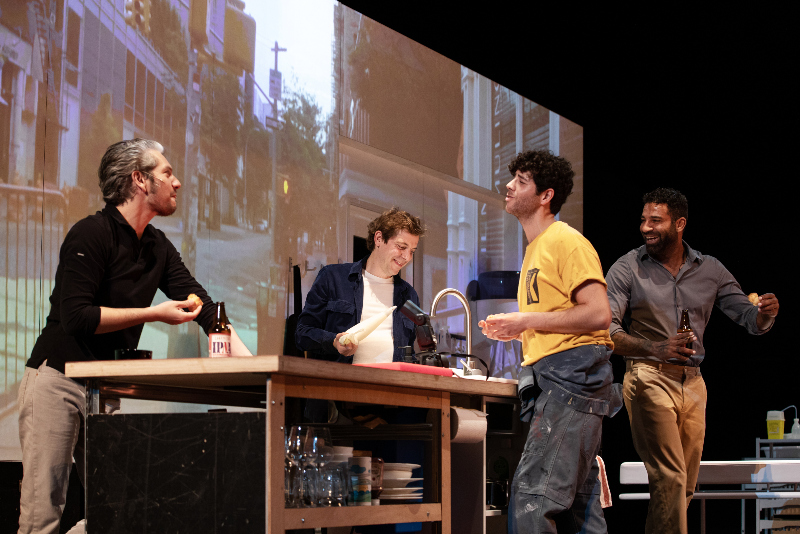 BOTTOM LINE: Some of the most intense theatre to come to New York in quite some time, A Little Life can also be rather moving, even cathartic—if you can take it.

A bunch of people leaving a show at intermission is often a sign that it…isn’t great. But when the walking out starts midway through the first act, that suggests something far more interesting. Such is the case with A Little Life, Ivo van Hove’s adaptation of Hanya Yanagihara’s acclaimed 2015 novel playing at BAM as part of this year’s Next Wave Festival. Given that the book is over 800 pages, no doubt some folks didn’t get around to reading it before catching this production, perhaps thinking it would be similar to van Hove’s work on Broadway—you know, those “light-hearted shows” like A View from the Bridge, The Crucible, and West Side Story. In fact, A Little Life has more in common with the other BAM outings of van Hove’s Internationaal Theater Amsterdam: Kings of War, Roman Tragedies, and especially 2014’s Angels in America. Yet A Little Life leaves even these epic tragedies in the dust when it comes to intensity. If you’ve read the novel you know—it’s…a lot.

A Little Life begins with four friends—Willem the actor (Maarten Heijmans), JB the painter (Majd Mardo), Malcolm the architect (Edwin Jonker), and Jude the lawyer (Ramsey Nasr). Whereas the novel spends many beginning pages on all four friends and only gradually shifts focus to Jude and his travails, van Hove pretty much zooms in on Jude from the jump, quickly introducing two other crucial figures in Jude’s life: Harold (Jacob Derwig), Jude’s former professor who eventually adopts him as an adult (Jude is an orphan), and Andy (Bart Slegers), Jude’s doctor and perhaps sole true confidante. (Given how the play fast-forwards to all Jude, all the time, it may not be immediately clear how Harold and Andy fit in if you haven’t read the novel, especially if you miss a line or two of the supertitles).

Jude needs all the help he can get because he’s packing some major baggage, which is spooled out over the show’s four hours via two connected devices. There is Jude’s former psychologist Ana (Marieke Heebink), who is now dead but appears as a kind of ongoing presence in Jude’s mind to help him speak his truth to those he is close to. (It’s worth noting that without Harold’s wife Julia and every other woman, Ana is the sole female character here, perhaps to further emphasize and explore the novel’s varying depictions of masculinity.) And then there are flashbacks to Jude’s three key abusers (all played by Hans Kesting). The big theme: Jude has experienced an unfathomable amount of abuse—from Brother Luke and the other adults at the monastery where he was raised; from Caleb, a fashion designer he meets as an adult; and from Dr. Traylor, who is…well, picture the family in Rob Zombie’s House of 1000 Corpses, but with a sexual and physical abuser instead of serial killers. And if that weren’t enough, all of that traumatic abuse repeatedly triggers Jude’s coping habits—when “the hyenas” start appearing, he self-harms. And in graphic, graphic ways (there’s more blood than multiple productions of Sweeney Todd combined).

As is typically the case with van Hove’s work with Internationaal Theater Amsterdam, A Little Life has no scene breaks or blackouts—the piece just pushes relentlessly on, with actors seemingly wandering in and out of the playing space, often busying themselves on the perimeter of the stage (where the bulk of the show’s set is located) for extended periods of time. For instance, Harold is forever prepping meals in the kitchen stage right (you can even smell the food he is prepping, via “artificial scents”), while JB fritters away the time in his art studio stage left. And the frequent location and time shifts often occur within a single line, and with almost no visual cues other than that Heebink (Ana, dead) and Kesting (the three abusers, all memories) both wear all black (costumes by An D’Huys), helping differentiate past from present. It all feels both incredibly casual, as if you’re the fly on the wall of someone’s life, but also fiercely inevitable, a bit like a wind-up toy where once you let it go, it somehow doesn’t stop. And here, this sense of relentless, unending progression only serves to intensify the accumulation of trauma.

I’m consistently amazed at how van Hove manages to fill hours and hours of stage time by having his actors interact with no scene changes in what is essentially an empty stage—while a few key events happen on the perimeter, most of the action occurs center, where there is only a isolated sink (more on that in a bit). It helps that the eight cast members are an incredibly tight ensemble. Physically, not a one is what I pictured after reading the novel, but given that the events span around forty years, van Hove seems to have favored casting based on an actor’s internal energy as opposed to their age or their “look.”  I especially enjoyed Mardo as the privileged and childish JB. Willem (who in some ways is the stand-in for the audience) becomes increasingly crucial as his relationship with Jude develops over time; especially in Act 2, Heijmans gives a powerful, emotional performance. As the show’s three villains, Kesting expands on everything he brought to his performance of Roy Cohn in van Hove’s Angels in America—he is simultaneously cruel, creepy, and oh-so-captivating. And then there is Ramsey Nasr, who as Jude takes on what must be one of the most punishing roles I’ve seen in quite some time. While Jude begins deceptively as the least “memorable” of the four friends, his story soon takes over, and Nasr gradually builds into a fearless, astonishing performance.

In the novel, New York City is almost another character, woven throughout in various ways. Here (with everyone speaking Dutch), it’s especially noticeable that the city is barely mentioned, and mostly relegated to the video (by Mark Thewessen and Jan Versweyveld) shown on two large screens on either side of the stage (it’s Ivo van Hove—there HAS to be video). Here, we get a slowed-down walk through the streets of New York that never ends (until it does). Given what happens to the video when Jude cuts himself, or when he finally opens up about some of the harshest abuse, this video seems to be tied in to Jude’s consciousness. Another van Hove trademark is the judicious use of music—the string quartet BL!NDMAN is on hand to provide underscoring, and as always, there are a few choice needle drops (including Nine Inch Nails and Arcade Fire) to further heighten some of the most emotionally moving moments. 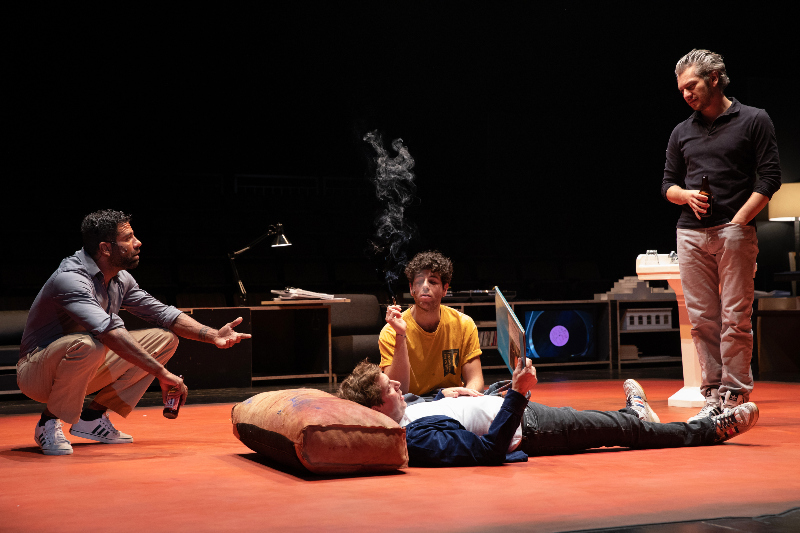 As far as the plot goes, van Hove pretty much sticks to the action of Yanagihara’s novel—he doesn’t change any of the essential story beats, including the devasting ending (nor does he just delete it, as he did in Angels). But van Hove nevertheless must edit somewhere. So whereas the novel highlights how incredibly, unbelievably successful everyone becomes (it’s one of the things I found most irritating when reading it), things like JB’s dealings with MOMA and Willem’s film career barely get a mention. Instead, van Hove goes all in on the abuse.

To be fair, Yanagihara intentionally piles on the abuse in her novel, wanting there to be, sort of like a fairy tale, “too much” of everything (career success included). But of course you can put a novel down and come back to it later on; with over 800 pages, this is all but mandatory. Here we get no such break, and are forced to watch as Jude moves from reliving one abusive scene to another, from one graphic scene of self-cutting (always by that sink, front and center) to another. Whenever he undresses we see the visible scars on his back, and as the show progresses, his torso becomes more and more blood-stained. He’s essentially a whipping boy or modern-day penitent, but in place of a hair shirt there’s a blood shirt. I mean this literally—I found one of the show’s most heart-breaking moments to be not a scene of abuse, but when Jude, after experiencing some rare vulnerability and emotional intimacy, must get dressed again, and dons the once-pristine white dress shirt that, hanging from his hand, we can now see is soaked in blood.

Perhaps it’s because, having read the novel, I came in somewhat prepared, but to me, van Hove’s signature style, when coupled with so many successive scenes of horrific violence and abuse, produces an almost clinical detachment (although clearly others felt differently). There is also the conscious choice to have Nasr forego any physical manifestation of Jude’s past and present trauma. Whereas the novel continually reminds us that Jude is in some way disfigured, walks with a limp, and is subject to ever-increasing “fits” (all of which is traced back to his childhood abuse), we get almost none of that in the stage version—no outward disfigurement, no limp, and almost no fits. Because it’s easy to forget how Jude’s past remains ever-present in his body, the events that occur towards the end seem to come out of nowhere, only further heightening that unrelenting sense of “how much more can this poor guy take?”

As he often does, van Hove ends A Little Life with a surprising and cathartic coup de théâtre, providing some final moments of grace and beauty, all the more memorable after so much violence. This is not to say that the entirety of A Little Life is bleak—given how much Jude keeps secret from his friends, it’s the more light-hearted scenes with the quartet (and later with Harold and Andy) that provide the strongest counterpoint, both for Jude and for us. Jude (perhaps understandingly, perhaps frustratingly) is never able to fully shift his focus to all that is beautiful in his own life. But as the play ends, it becomes quite clear that van Hove hopes we will instead follow Harold’s lead, and somehow find a way to celebrate what we can in our own little lives.