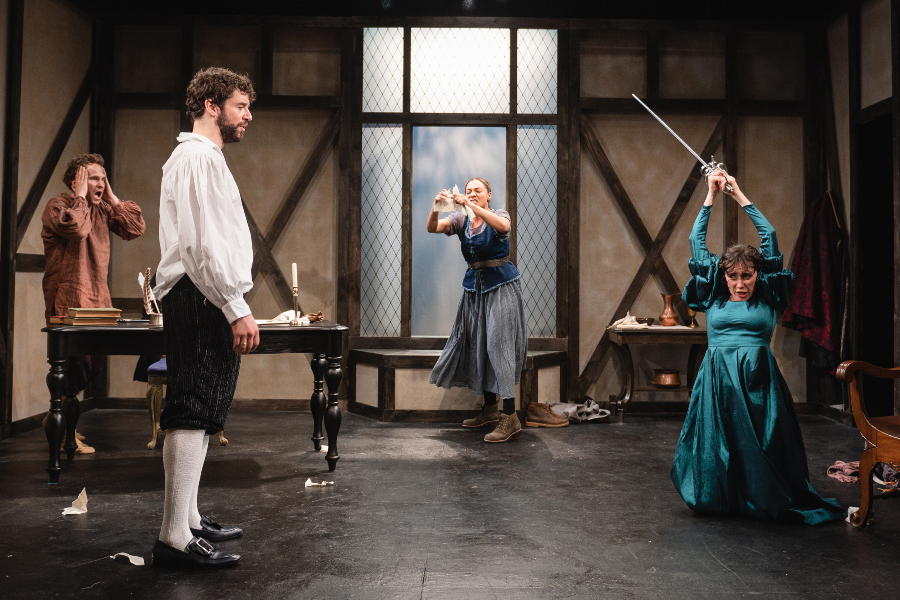 BOTTOM LINE: An angry woman finds her voice, and Shakespeare writes King Lear, during quarantine in 1606.

Talene Monahon’s sparkling, barbed comedy Jane Anger gives us not only Shakespeare in Quarantine, but a tale of angry women claiming their own voices. The clever play imagines the “cunning woman” who might have written “Jane Anger, Her Protection for Women,” an actual pamphlet from 1589 defending the rights of women and championing the idea that women could be writers, a novel notion for Renaissance England. Scholars have yet to identify the actual Jane Anger, but Monahon’s Jane reminds us she was indeed “real.”  The play juxtaposes Jane’s desire to get her pamphlet published against Shakespeare’s efforts to write King Lear during a pandemic.

Monahon’s cheeky re-imagining of Shakespeare recalls Shakespeare in Love, but she moves beyond what George Bernard Shaw termed “Bardolatry.” Shakespeare in Love shows us a witty, heroic Bard who cured writers’ block through romance, preserving the myth of Shakespeare as universal genius and super-human.  Jane Anger gives us a very flawed, conceited Shakespeare who attempts to cure writers’ block through lust and liberal stealing from other people’s work. While both Shakespeare’s servant and wife repeatedly tell Shakespeare that “You speak for all people,” Jane Anger challenges the notion that Shakespeare is everyone’s Bard. In Monahon's telling, Shakespeare (Michael Urie) is unapologetically awful. He tells bad jokes about women writers. He doesn’t regret missing the death of his son ten years earlier from plague. He speaks Renaissance-inflected speech mixed with contemporary language, quoting Hamlet one moment then blasé-ly wondering “What do you think Ben Jonson is doing right now?”

The play also finds uncanny parallels between the plague of 1606 and our own pandemic.  Jane enters the theatre masked in the eerie beaked mask and cloak of a plague doctor, staring down a contemporary audience in beaked KN95 masks gazing back at her. Characters demonstrate “ponying,” the social distancing of 1600s, where people must keep at least one pony’s length apart to avoid spreading plague. Shakespeare and his servant Francis (Ryan Spahn) deal with the boredom of being locked inside by making up ridiculous songs. Later, passerby discuss a nearby pub that offers outdoor dining.

The cast is uniformly excellent, shifting easily from comedy to seriousness. Just as Shakespeare acted in his own plays, so does Monahon. Here she plays a lovestruck yet angry Anne Hathaway, Shakespeare’s neglected wife, who pines for her husband yet reproaches him for spending years away from his family.  Amelia Workman is a vibrant, determined Jane Anger whose righteous anger gives the play its heart, while Ryan Spahn steals his scenes as Francis, a wily servant/aspiring actor with a penchant for “Who’s on First”-style wordplay. Michael Urie’s transcendent Shakespeare is both grandiose and petty at once, and he brings the house down when outlining a future play about witches that has more in common with Wicked than Macbeth.

In all, Jane Anger is a surprising look at a Shakespeare who is both our contemporary and our history, and imagines what might have happened had Jane given full vent to her anger.

(Jane Anger plays at the New Ohio Theatre, 154 Christopher Street, through March 26, 2022. The running time is 95 minutes with no intermission. Performances are Mondays, Wednesdays, Thursdays, and Fridays at 7:30; Saturdays at 2 and 8; and Sundays at 2. Tickets are $35-$75 and are available by calling OvationTix at 866-811-4111, or by visiting janeangerplay.com.)