Off Off Broadway, Experimental Theatre
Runs through 4.9.22
The Gym at Judson, 243 Thompson Street 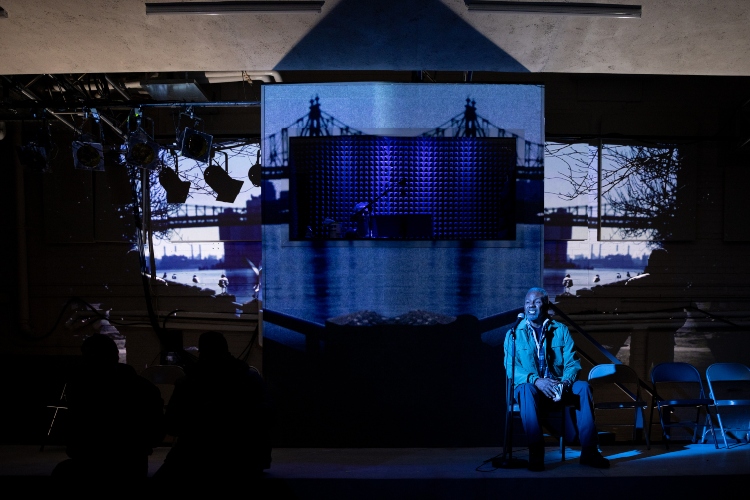 BOTTOM LINE: A timely, theatrical exploration of loss and survival revolving around Hart Island, one of New York's cemeteries for the indigent and forgotten.

Mason Holdings’ haunting Hart Island epitomizes downtown, avant-garde performance at its best: cerebral, theatrical, scrupulously researched, and bursting with heart. This lyrical and compassionate piece, written by Tracy Weller, the company’s founder and artistic director, educates the audience about the history of Hart Island, which has functioned as one of the city’s potters’ fields—a public cemetery for the indigent and unwanted—since 1869.

Weller frames the piece around a Narrator (played by Weller) recording audio for some kind of digital tour of New York’s forgotten islands. The Narrator is immediately struck with loss—the woman she has replaced seems to have passed away before the project was finished, presumably from COVID. As the Narrator records her narration, her words move from a macrocosm of historical facts—explaining that all islands are fragments of Pangea, the original prehistoric united landmass—to a microcosm of particular details that spark emotional responses. She breaks down in tears as she tells the story of an innocent young man held in solitary confinement at Rikers Island for decades for a crime he did not commit. As the Narrator reads from her script, other voices slowly float in. These are the voices of people connected to the island in some way, from a woman whose baby is buried there to people who had been incarcerated at Rikers and dug graves at Hart Island. Gradually, six actors appear on stage, embodying these diverse characters.

Weller’s powerful, lyrical script at once captures the desolation and despair of Hart Island as well as its beauty, and makes a passionate plea to recognize and remember the forgotten people who have touched its shores. As a performer, Weller is a compelling, dynamic presence. She is matched by the company of six powerful actors: Julie Asriyan, Nora Cole, Jimmy Crowell II, James Foster Jr., Daniel Kublick, and David Samuel. Kristjan Thor’s sensitive direction lends fluidity to the piece. Christopher and Justin Swader’s evocative set evokes the earth of Hart Island, the memories of lost lives buried there, and the cool clinical-ness of the sound booth where the Narrator is recording the script. Yana Biryukova’s thrilling video and projections capture images of both historic and contemporary Hart Island, as well as the six people whose stories unfold throughout the evening.

All in all, Hart Island is a moving meditation on loss and life, and a moving, socially conscious piece of theatre for these uncertain pandemic times.

(Hart Island plays at The Gym at Judson, 243 Thompson Street, through April 9, 2022. The running time is 75 minutes with no intermission. Performances are Thursdays and Fridays at 8, Saturdays at 2 and 8, and Sundays at 3 and 8. Masks and vaccine required. Tickets are $40 and are available at masonholdings.org.)