By Jacob Perkins; Directed by Gus Heagerty
Produced by i am a slow tide 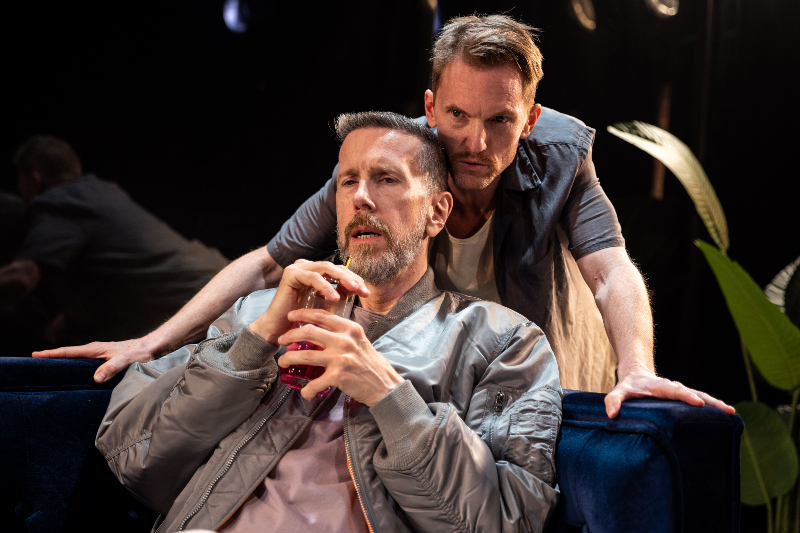 BOTTOM LINE: You may never think of Grindr (or Tinder or Scruff) in the same way again.

A man (Robert Stanton), dressed in Hell’s Kitchen casual, relaxes on a couch, telling a story about a chlamydia scare to someone offstage. Another man (Scott Parkinson) walks in with two Heinekens, and they remain, many feet apart, presumably getting to know each other. There is a lot of meaningful eye contact and fraught silence. It seems a familiar enough scene—the awkward small talk while you decide what you do or don’t want to do with this guy you just met on an app. But in Jacob Perkins’s beguiling new puzzle box of a play The Gold Room, you don’t want to get too comfortable.

It’s almost impossible to say more about what happens in The Gold Room without ruining the unsettling experience of seeing it. This is because Perkins is adept at upsetting audience expectations—just when you think you’ve “figured it out,” things change. If his focus (per the press release) is queer identity, Perkins leaves us without the traditional cues we're used to relying on. His characters are nameless (Stanton plays “One” and Parkinson is “Two”), and while director Gus Heagerty has cast two middle-aged white men, the script merely says the two actors should be the same race and age.

So who are these men? It’s hard to tell, and that’s kind of the whole point. As much as they seem to be getting to know each other, Perkins continually frustrates our own attempts to do the same. Elizabeth Ward’s deceptively informative costumes seem to provide some clues, but you quickly learn not to trust what you see. And Stanton and Parkinson are both excellent in their obfuscation—it’s tricky to play characters that hide so much from both themselves and the audience without crossing over into the bewilderingly cryptic, and these two actors walk that line well.

Heagerty paces things well, keeping The Gold Room at a taut 60 minutes without it ever feeling rushed. He knows how to let the play breathe, which is crucial here. And he’s assembled a fine design team. Emona Stoykova’s crisp set—white shag rug, blue velvet sofa, and glass walls that almost act as mirrors—is somehow as unsettling as Perkins’ script. Meanwhile, greer x’s subtle lighting provides the only “gold” you will see in The Gold Room (the title comes from a poem by Richard Siken, excerpted in the program). Taul Katz provides the sound, from the white noise of the pre-show to several key recordings towards the end.

Indeed, if I have one critique of the script, it’s that the last minutes of the play are almost entirely given over to these recorded voices—after watching these two men experience such intense attempts at connection, this move is somewhat distancing. But this is a minor, minor quibble. For those interested in discovering queer voices that actually have something new to offer, Perkins, along with Heagerty’s company (with Sam Max and Anne Troup) i am a slow tide, are ones to watch.

(The Gold Room plays at HERE, 145 6th Avenue, through November 5, 2022. The running time is 60 minutes, no intermission. Masks required. Performances are Wednesdays through Saturdays at 7; Sundays at 2. Tickets are $30. For more information and to purchase tickets visit slowtide.info. For more information about HERE, visit here.org.)

The cast is Robert Stanton and Scott Parkinson, with understudy John William Watkins.