Off Broadway, Musical
Runs through 4.24.22
The Players Theater, 115 MacDougal Street 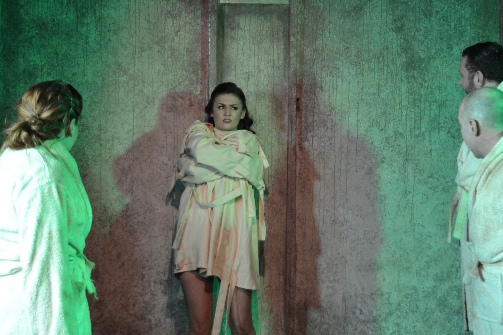 Bethany McDonald and Company in Brilliance. Photo by Kelly Stoneberger.

As evidenced by countless scandals involving celebrities’ mental health battles, substance abuse issues, and public breakdowns, a life in the spotlight can challenge even the most resilient of souls, if not unhinge them completely. Moreover, given the entertainment industry’s inherent pressures and capacity to attract brilliant but unstable individuals, we may find ourselves questioning the degree to which such scenarios reflect the troubled psyches of the celebrities in question, the toxic systems surrounding them, or both. In its look at the life of Frances Farmer, a Golden-Age Hollywood actress known for her talent and tempestuousness, the new musical Brilliance explores these questions, bringing to light the issues of autonomy, responsibility, and stigma surrounding our view of mental health and those who publicly struggle with it.

Brilliance follows Frances (Bethany McDonald)’s dramatic rise to, and fall from, fame, underscored by a lifetime of inner turmoil and mismanaged control by industry professionals, doctors, and family alike. Despite early success as a beautiful and magnetic Hollywood ingenue, the strong-willed Frances found herself ill-suited to the spotlight, balking at studio executives’ attempts to shape her personal life and mold her into their vision of an ideal celebrity. Though a stint in New York theatre offered respite from stultifying B-movie roles and her unhappy studio-arranged marriage, Frances’ stormy affair with playwright Clifford Odets (Gabriel Kane) would launch a chain of personal and professional betrayals leading to her decline.

Spiraling into alcoholism, substance abuse, and frequent run-ins with the law, the next several years of Frances’ life found her under state-and-family-dominated conservatorship and shuttled between the care of various mental institutions and her overbearing mother Lillian (Jeri Sager). Subjected to problematic treatments and gaslit by both doctors and loved ones, Frances found herself locked in an ongoing fight for her sanity and autonomy. It was not until years later that a single letter from her father broke this cycle, freeing her from psychiatric control to care for Lillian in her old age. Following her mother’s death in 1953, the courts finally deemed Frances sane enough to warrant emancipation and hold legal control over her life.

Mental illness and tabloid-worthy celebrity scandals are challenging subjects around which to build a musical, and while Brilliance makes an earnest attempt to capture the subtleties of Frances’ story, its slips into camp and melodrama often undermine these efforts. McDonald and Sager touch upon the specificity and nuance of Frances and Lillian’s codependency, but their scenes frequently devolve into generic mother-daughter screaming matches. The same can be said for quiet moments of connection between Frances, other patients, and rare sympathizers, which get buried beneath broad-stroke depictions of anguish, madness, or villain-victim dichotomy.

The show’s tonal shifts lend further confusion, couching serious or darker topics against incongruously up-tempo musical numbers or attempts at lighthearted comedy. (One scene, in which Frances, having just received brutal electrotherapy, launches into a torchy song about “the shock of it all,” followed by a show-stopping ensemble routine, epitomizes this practice). Whether or not these choices are meant to spark irony, depict Frances’ fractured mental state, or highlight the absurdity of the systems to which she must submit, they read as puzzling and tend to diminish the piece’s overall impact.

Despite its shortcomings, Brilliance raises several significant questions about our culture’s dialogue around mental health, particularly the concept of individual and collective responsibility for those who suffer. Though her contemporaries painted Frances as arrogant, truculent, or incapable of helping herself, we are left wondering if Frances was truly “unwell” or just “not well-behaved” by society’s standards—or, more pointedly, if she was driven by that society to self-destruct and then blamed for her response to this oppression. As we witness the conservatorship battles of such troubled young female artists as Britney Spears and Amanda Bynes, or the shaming of BIPOC celebrities such as Will Smith for public displays of anger, we must view each controversy within this broader social context and turn a critical eye toward both the individuals and systems involved. Though our past may be dark, Brilliance posits, closer scrutiny may light the way to a better future.

(Brilliance plays at the Players Theater, 115 MacDougal Street, through April 24, 2022. The running time is 2 hours 45 minutes with one intermission. Performances are Thursdays through Saturdays at 7 and Sundays at 3, with a matinee on Saturday 4/23 at 2. Proof of vaccination and masks required. Tickets are $52-$72. For more information, visit musicalbrilliance.com.)