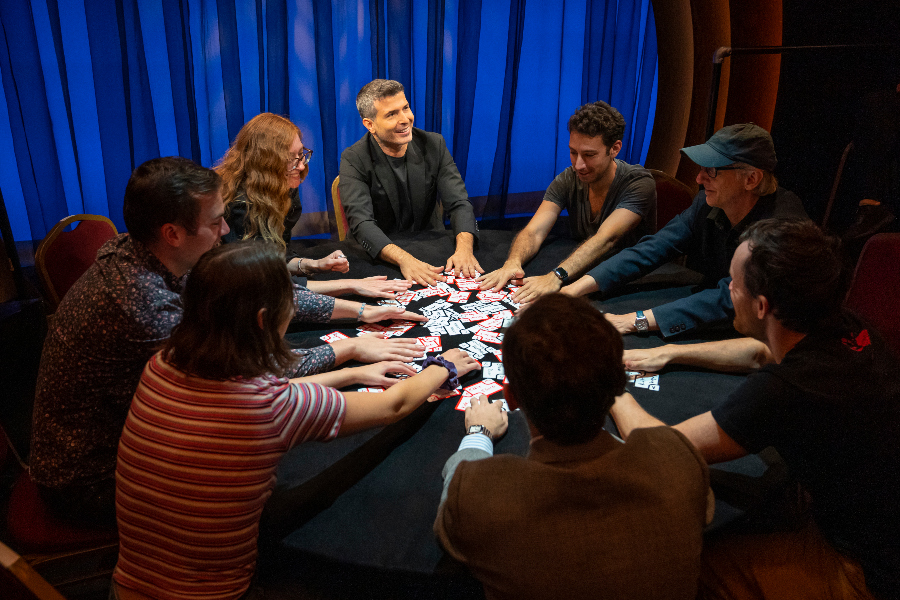 Aiming to be one of the most intimate magic shows you will ever see, Asi Wind’s Inner Circle begins by having entering audience members write their name in sharpie (red or black) on a blank card. Forgoing the traditional deck of clubs and hearts and diamonds and spades, Wind prefers that we, the audience, create our own deck each night. Aside from making it that much harder to use duplicate cards for his tricks, it also serves to personalize the performance. After all, there is always the chance your own name could be chosen, and what is more personal, more intimate, than your name?

As is the case with most magic shows, to explain too much about the specifics of any trick is probably a bit on the spoiler-y side. Suffice to say, it’s all variations on a classic—someone picks a card in some (often convoluted) way, and Wind finds it. At its core, this is one of the most basic of all tricks—ask any 10-year-old interested in magic, and they probably know at least one version. While Wind starts out relatively simply, he then builds on this theme; later tricks become increasingly layered and complex, with the final reveal being as unexpected as it is inevitable.

But no one is escaping from a locked box, or cutting a woman in half, or making the Statue of Liberty disappear—this is “close-up magic,” which explains why Wind, with the help of production designer Adam Blumenthal, has crafted such an intimate space in the much larger Gym at Judson, where there are fewer than 100 people in the audience, and everyone is within mere feet of the action (occasionally an overhead camera is used to project the details of the cards).

But the intimacy isn’t just spatial—the charming (and often very funny) Wind quickly creates an easy rapport with the audience. He teases, but we’re always in on the joke, and this inclusivity makes it feel like we’re that much closer to being in on the magic as well. He periodically asks those at the central table (the priciest seats) to help him shuffle the cards, or cut the deck, or make different piles—the point presumably being to cede control over card manipulation to those who aren’t “in on it.” But of course as with all magic, that’s just for show—the audience only sees and does what Wind wants us to.

A case in point—I was asked to venture out into Washington Square Park, ask a random passerby for a number “up to 30,” and then return to the theater. Accompanied by an usher, I did as I was asked; when I returned, Wind had me pick another number, add them, and then tell him the result, which then factored into the trick. During this whole tortuous process, it became clear to me that whatever number I ended up with was essentially irrelevant—he would have worked with whatever I gave him. But even realizing this, I have no illusion that I’ve learned any big secret—in fact, I suspect that this is Wind’s entire point.

Amusingly, at one point Wind asks someone to tell him to “stop” as he moves his hand over the cards…and then pointedly ignores them. Since it is clear by now that all of the shuffling in the world won’t really “matter,” we laugh it off. But then one can’t help wonder—is this the one time during the night where Wind actually had to ignore the audience member? Or is that just for show too?

What I appreciate about Wind’s Inner Circle is throughout the evening, he both tells and shows us that most of what we are watching is just window-dressing and “performance.” One of his most-watched YouTube clips involves Wind purportedly “telling” us (along with Penn and Teller) how he does the trick (of course, he doesn’t really tell us). And during Inner Circle, Wind talks about a few of his mentors and heroes—Houdini taught him the importance of drama, Juan Tamariz about how to manipulate expectations, and “The Professor” Dai Vernon about how even the tiniest detail (like whether you flip a card towards or away from the audience) matters. And in this sense, while my sojourn into Washington Square Park, or someone else’s shuffling and cutting and piling of the cards, doesn’t really “matter,” Wind also makes it clear that—whether for purposes of distraction or dramatic tension or whatever else—it's also the only thing that really does.

(Asi Wind’s Inner Circle plays at the Gym at Judson, through December 31, 2022. The running time is around 60-75 minutes, with no intermission. Performances are generally Thursdays through Sundays at 7 and 9:30; some Fridays also have a performance at 11:30, and some Sundays don’t have a 9:30 show, so check the website for exact dates and times. Tickets are $190, with table seating around $240; at press time discounts were available (check BroadwayBox.com). For tickets and more information visit asiwind.com.)