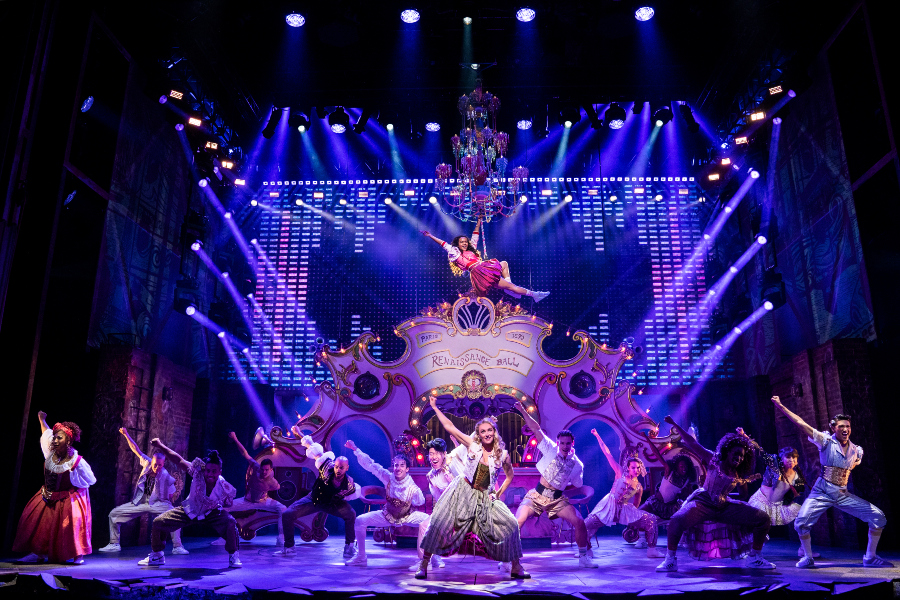 Lorna Courtney and the cast of & Juliet. Photo by Matthew Murphy.

BOTTOM LINE: Shakespeare gets the pop-confection treatment in this crowd-rousing update.

The new jukebox musical & Juliet begins with William Shakespeare (Stark Sands), who, as "the greatest playwright of all time," kicks things off with “Larger Than Life.” That Shakespeare looks like a member of the Backstreet Boys isn’t really surprising, since & Juliet is more homage to 21st-century uber producer Max Martin, who oversaw the 28 songs peppering the musical, than it is to the Bard. Will—young, hot, not a little egomaniacal, and feted by his adoring fans—is celebrating the ending to his new play Romeo and Juliet. Yet his frustrated wife Anne Hathaway (Betsy Wolfe) thinks maybe her husband's work could use some editing: “Maybe she doesn’t kill herself just because he killed himself?!” Tart-tongued and creatively-minded, Anne is insistent, singing (what else) "I Want It That Way," before suggesting that Will's ending could perhaps be the beginning to a new play, where Juliet "finds her voice."

In Anne's creation, Juliet (Lorna Courtney, bursting with abundant spirit) lives, but learns at the funeral for Romeo (Daniel Maldonado, gamely filling in as the understudy), that her beloved had many other girlfriends (a lovely ballad take on “...Baby One More Time”). So Juliet sets off to Paris, to avoid being sent to a nunnery by her furious parents (Nicholas Edwards and Veronica Otim). Joining her are nonbinary best friend May (Justin David Sullivan), nurse Angélique (Melanie La Barrie), and Anne, who inserts herself into the action as Juliet's "other best friend" April. Soon after arriving, May meets Francois (Philippe Arroyo), and the two bond over their similar struggles to meet certain expectations. Yet when Juliet also sets her sights on Francois, the two besties become rivals. Not to be left out of the usual Shakespearean hijinks, Angélique encounters one of her old flames, Francois’s father Lance (a delightful Paulo Szot, whose gorgeous voice improbably croons a delightful "Teenage Dream").

It's easy to view jukebox musicals with disdain, and this English major also wondered, is this really how we want people learning Romeo & Juliet? But as I saw how my friend (who normally falls asleep at shows) not only stayed awake, but laughed a lot, I began to loosen my professorial collar. I surrendered to the silliness, at least somewhat, when the gang crashes Francois’s party, and Juliet lets loose swinging on a chandelier to “Blow,” and even more during the big reveal at the end of Act 1, when “It’s My Life” is brilliantly employed. Another favorite moment comes in Act 2, with a surprise (or is it?) rendition of “Everybody (Backstreet’s Back).” Dazzling work by set designer Soutra Gilmour, and Paloma Young’s anachronistic costumes, work well with the young cast, who show off a lot of moves (thanks to Jennifer Weber's choreo) over the course of more than two dozen numbers.

While multiple romances are a Shakespearean staple, it does feel like there’s a demographic ticking of the boxes: you have the parental set (Angélique and Lance), an LGBTQ couple (May and Francois), a Gen Xer pairing (Will and Anne), and another for the romantics (Juliet and...I won't spoil that). And of course there is the inherent appeal of Martin's hits to all those (Millennials and beyond) who grew up with these tunes.

Thanks to David West Read’s writing, I was most invested in Will and the OG Anne Hathaway. While Sands’ Will is a charming, pompous jerk, he's never a lost cause, while Wolfe is a fiery and fierce Anne, a woman who tries to invent a space for Juliet to have voice, while also fighting for her own. Their spiky exchanges drive the plot, but are also funny, honest, and lived-in. Certainly, the inclusiveness of & Juliet will be welcomed by people wanting to see diverse representations. But it also makes for an overstuffed show that gives the characters’ stories short shrift. Nonetheless, while & Juliet is far from "Fuckin' Perfect," I’m “Confident” that by the finale, most in the audience will be at the point where they “Can’t Stop The Feeling."

(& Juliet plays at the Stephen Sondheim Theatre, 124 West 43rd Street, in an open-ended run. Running time is 2 hours 30 minutes with an intermission. Performances are Tuesdays at 7; Wednesdays at 2 and 8; Thursdays at 7; Fridays at 8; Saturdays at 2 and 8; and Sundays at 3. Tickets start at $89 and are available at andjulietbroadway.com.)