Yeah, But Not Right Now

By A.J. Holmes; Directed by Caitlin Cook
Produced by Darren Lee Cole and the Soho Playhouse 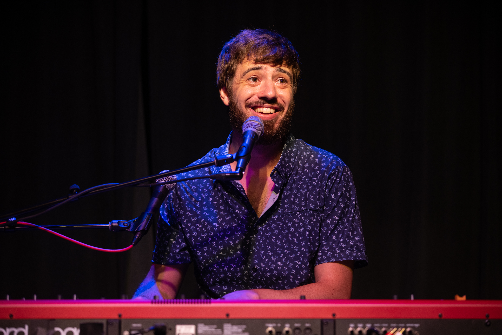 A.J. Holmes in Yeah, But Not Right Now. Photo by Arin Sang-urai.

BOTTOM LINE: A.J. Holmes jokes that he doesn’t know why he hasn’t won a Tony yet. After seeing this performance, I agree with him wholeheartedly.

While many are loath to admit their own shortcomings, A.J. Holmes has crafted a one-man-musical that belts out (and harmonizes!) the very worst parts of himself: his procrastination, his issues with his parents, his sexual misadventures, his pathological lying, his neediness to be needed, and finally, his awareness that all of this self-awareness doesn’t make him cool. From another performer these topics may be dreary, but coming from “Broadway’s A.J. Holmes” (he apparently tried to change his first name to Broadway), it is charming and very entertaining.

With regards to musical ability, Holmes is undeniably talented. It’s not surprising that he was poached by both national and international tours of shows like The Book of Mormon immediately after graduating from college. His vocal talent is matched by his work as a composer and instrumentalist. The keyboard seems to be an extension of his voice, as is his guitar, djembe, and did I spy a steel handpan? Holmes often uses a loop machine to great effect, recording his voice and then layering on recording upon recording in order to harmonize with himself, the layers creating a full-blown concert coming from a single person. It is fascinating to watch a single phrase of music transform and blossom into a wall of sound. His compositions fit with his story well, rolling the audience in laughter and moving us deeply as his narrative progresses

The audience seems to be the key to unlocking the very best of Holmes. He engages us throughout the performance and doesn’t seem bothered by the odd interjection. If anything, Holmes flourishes from live interactions, creating whole songs from statements (á la an improv show) or crafting a goodbye song as an audience member leaves following a vulgar joke about necrophiliacs at a cemetery. It is hard to know if you're watching a one-man musical or a stand-up comic, luckily for the audience it's a combination of both.

While any performance wants to leave the audience wanting more, Holmes’ show may actually benefit from allowing the audience into more of his story. While Holmes is upfront about his various transgressions and mistakes over the years, he is surprisingly reticent about sharing his moments of celebration and joy. While an hour (the 90-minute performance includes a 30-minute opening from a different musical guest for each show) is enough time to share Holmes' agony, we may well also want to experience more of those moments of ecstasy that make theatre-goers all over the world stand up and cheer.

(Yeah, But Not Right Now plays at The Soho Playhouse, 15 Vandam Street, through October 17, 2021. The running time is 90 minutes with no intermission. Proof of vaccination and masks required. Performances are Thursday to Saturday at 7. Sundays at 7 and 9. Tickets are $25 - $42 and are available by calling 212-691-1555 or at sohoplayhouse.com.)