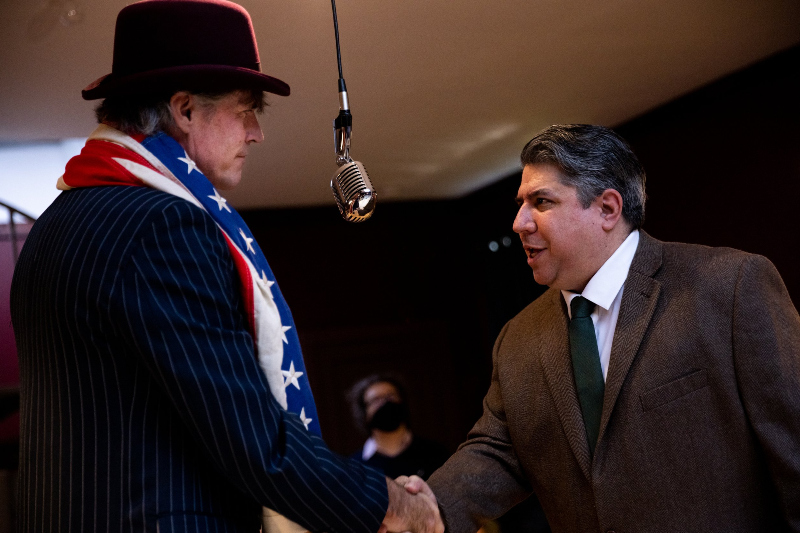 BOTTOM LINE: Party like it’s 1929 in this ambitious, if flawed, immersion into a notorious New York City political machine.

Tammany Hall, the new immersive show at SoHo Playhouse, banks on the parallels between 1929 and 2021 to delight and provoke its audience—and to a point, it works. Having survived 2020—the corruption of Trump, the scandals of Cuomo, the pandemic—you don’t have to stretch your imagination when the show drops you head first into the seedy politics of 1929 New York City. But after 90 minutes of being yelled at by opposing candidates, the entertainment wears thin. Big on atmosphere, the show skimps on developing character, theme, or plot. In the end, Tammany Hall feels like one of Jay Gatsby’s parties—glittering and swirling with guests, but empty at its core. There’s plenty of Roaring Twenties glitz—especially in a charming musical sequence titled "Violet"—but frustration curdles the fun.

Tammany Hall was the corrupt “political machine” that once ran the city’s politics. The show, which opened on election night 2021, is set on election night 1929, when amoral incumbent Mayor Jimmy Walker (Martin Dockery) debates his opponent, reformer Fiorello LaGuardia (Christopher Romero Wilson), one last time. The action is set at the Huron Club, the nightclub/theatre/speakeasy where Walker and his Tammany cronies hold court. For additional verisimilitude, the real-life Huron Club occupied the building where the SoHo Playhouse is today.

Co-creators Daren Lee Cole and Alexander Flanagan-Wright provide plenty of exposition, plenty of the time—subtle it ain't. Walker and LaGuardia debate in a literal boxing ring; they shout policy every time you see them. Dockery imbues Walker with a charming sleaziness and a hint of conscience, while Romero Wilson’s earnest LaGuardia exudes righteous anger. Still, it’s hard to feel empathy for either, because the dialogue tends to repeat campaign-speak without expanding its themes.

The show’s immersive structure means audience members will experience it differently. Everyone is together for three key scenes: the opening debate, a rehearsal for "Violet," and the final election results. If a character invites you to follow them, you see other, shorter scenes in different parts of the building. LaGuardia encourages a group to go up to the roof; gangster Legs Diamond (Nathaniel J. Ryan) escorts people to Walker’s private rooms, and so on.

As one example, my friend and I had different experiences during "Violet," a pastiche of 1920s musicals. I sat in the theatre and saw a scene unfold there; she volunteered to be part of the chorus and was taken to the dressing rooms. Depending on your track and timing, you might see more or less of certain characters. I arrived early to witness a pre-show encounter between Legs Diamond and the charismatic showgirl Kiki (Chloe Kekovic) on the steps of the Huron Club, but I barely saw these dynamic performers after that.

Herding the audience together helps everyone follow the main story, but it doesn’t always leave time to explore the detailed 1920’s environments. My friend couldn’t read the papers strewn across the dressing room tables; I only glimpsed the roof scene on the way to "Violet." It is thrilling to see the entire building re-dressed in Art Deco glam, but it’s glam on an Off Broadway budget. Everything looks a little cheap, from the monochromatic flats on the musical stage to the hole in the ceiling of the debate room that appears to have been hastily covered with white plastic.

Keep in mind the experience will involve stairs, and you might not always have a conventional chair to sit on—or any chair at all. I often found myself on high, backless stools, my friend sat on a radiator, and one woman lugged her own portable chair from scene to scene. Even larger playing areas, such as the theatre and speakeasy, have low steps that can be hard to see. My feet and back were aching slightly by the show’s end. The cast are patient and will offer you an arm to lean on if you need it, but pace yourself accordingly. Save your strength, and reward yourself with a drink at the speakeasy after the show.

Tammany Hall seems to yearn for complexity. The intensity of Dockery and Wright’s performances, the cinematic fluidity of Lee Cole and Flanagan-Wright’s direction, the blood-red accents of Dan Daly’s sets, and the moodiness of Emily Clarkson’s lighting all hint at something dark and brooding, a show that wants to reflect forward to our own troubled moment. But the two-dimensional characters and cliched dialogue hold the show back. After 90 minutes, I knew about as much as I did at the beginning—that Tammany Hall (the political machine) was “bad,” though I wasn’t quite sure why. And that LaGuardia fought for reform, but I wasn’t quite sure how. A final exhortation from LaGuardia that “Whenever any Form of Government becomes destructive, it is the Right of the People to alter or abolish it” drew a single, chilling clap in the midst of dead silence. After the violent attack on the Capitol on January 6th, the idea of the People abolishing government no longer has an optimistic ring.

(Tammany Hall plays at SoHo Playhouse, 15 Vandam Street, through January 9, 2022. The running time is 1 hour 30 minutes with no intermission. Proof of vaccination and masks required. Performances are Wednesdays through Fridays at 7 and 9; Saturdays at 3, 7, and 9; and Sundays at 5 and 7. Tickets are $89. For tickets and more information visit sohoplayhouse.com.)