Book and Lyrics by Mirit Shem-Ur; Directed by Tsedi Sarfati 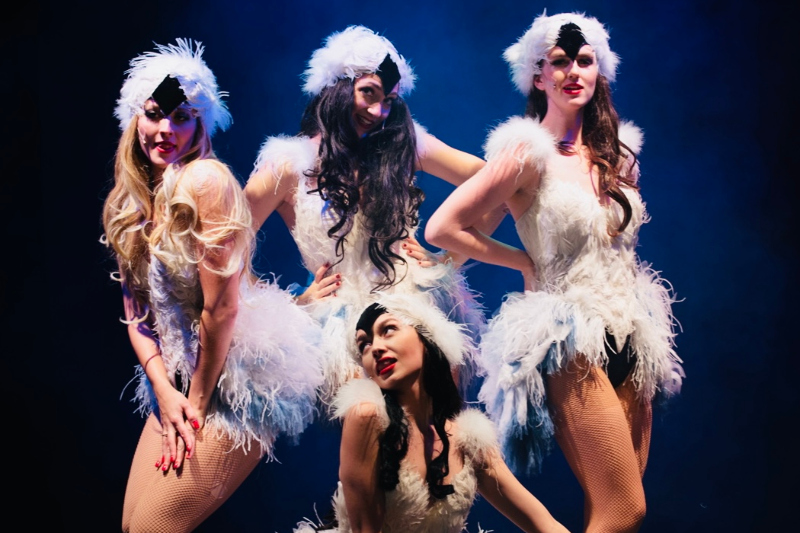 BOTTOM LINE: A frothy, sexed-up, if slight take on the famous Tchaikovksy ballet.

There's trouble in the kingdom of Haufenhaffen, with a spendy Queen driving the principality into bankruptcy, and a prince who looks upon the eve of his engagement ball to a TBD bride as a walk to the gallows. Widowed Queen Sherdanelle (Maya Murphy) wants to burn through money and enjoy playtime with Von Schliefen (Berlin Charles). She's been getting cash infusions from the nouveau riche and gauche Von Rothbart (John Stillwaggon) and is pushing her son Prince "Ziggy" Siegfried (Kenneth Remaklus) to make an honest woman of Von Rothbart's fiery daughter Odile (Jennifer Posie Morrison), with whom he's been carrying on.

But the vapid playboy Prince is only 21, and wants nothing more than to hang out with his friends Benno (Cameron Cave) and Wolfgang (Teddy Calvin). Prince Ziggy has zero interest in walking down the aisle or giving up his title, and thus must find a rich princess to financially rescue the royals. Von Rothbart comes by his wealth courtesy of Swan Lake Mansion, where the Swannies (Emily Sharik, Caroline Mcfee, Lily Page, and Chandler Corley-Essex) entertain the men of the land with dancing and more illicit activities. New to the crew is the mysterious Odette (Madeline Lukomski), whom Von Rothbart has rescued from the streets. She's set to make her debut at the party. Merriment, mix-ups and romance transpire as four princesses, plus Odile and Odette, vie for the prince.

Tchaikovsky's 19th-century classic gets a kick in the tutu with racy 21st-century lyrics from librettist Mirit Shem-Ur and additional music from Sharona Pick. There are many songs packed into 90 minutes, some of which, like Odette's solo "Once Upon A Time," could be cut or retooled. And some might benefit from being splashier and bigger, but maybe if the show moves to a larger space. Among the dozen ballads and pop tunes, my favorite numbers are "Mighty Queen" and "The Lord Of The Tower." The former serves as a showcase for Murphy and the ensemble, and the latter for Stillwaggon and the Swannies. "Lord" also featured great Fosse-esque choreography from Amit Zamir, along with Ella Koelsnik's saucy swan costumes. Indeed, it looks as if much of the budget went to the vibrant costumes: a worthwhile choice.

As the slightly more senior members of the cast, Murphy, channeling regal imperiousness, and Stillwaggon, as the lascivious, social-climbing brothel owner with an accent straight outta the Bada Bing, are among the standouts. The antics of Calvin, Cave, and Charles are also a lot of fun to watch; I would have been happy if the three had more stage time. In fact, all performers bring abundant high spirits to the production.

Although far less known here in the U.S., Shem-Ur and Tsedi Sarfati are very big deals in Israel. Sarfati was a child actor, actually playing the prince in Swan Lake before becoming a director in the 1970s. Shem-Ur has been writing songs for decades, including the musical Mary Lou, with her former husband, Israeli pop star Svika Pick. She and her daughter (also a singer and composer) Sharona Pick came up with the idea of injecting rock into the ballet, and the show had its premiere in Israel several years ago. A different version of the rock opera ran in New York in 2019, but that mostly Israeli cast is no longer with the show.

If you're looking for a different take on a classic, especially during the holiday season when there are many traditional stagings of The Nutcracker on around town, jeté your way to the Actors Temple Theatre for this limited run.

(Swan Lake Rock Opera plays at the Actors Temple Theatre, 339 West 47th Street, through December 30, 2021. The running time is 90 minutes with no intermission. Performances are Thursdays at 7. Proof of vaccination and masks required. Tickets are $39.50-$49.50 and are available at telecharge.com. For more information visit swanlakerockopera.com.)